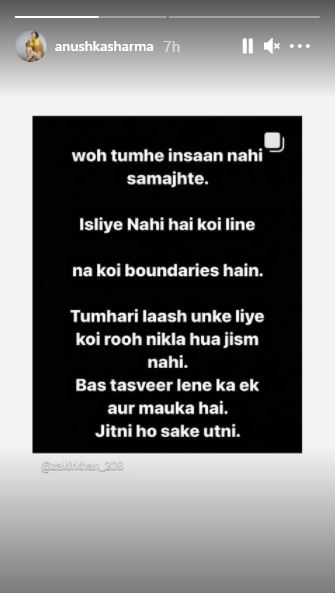 Actor-producer Anushka Sharma on Friday took to her Instagram stories to amplify stand-up comedian Zakir Khan’s post talking about celebrity deaths becoming a ‘tamasha’. Zakir’s post comes at a time when the media has been covering actor Sidharth Shukla’s death and giving live updates about the ‘Bigg Boss 13’ winner’s last rites, reporting about his distraught family including writing about and sharing photos of the late star’s rumoured girlfriend Shehnaaz Gill.

Zakir’s verse in Hindi, which was amplified by Anushka Sharma, roughly translates to – “They don’t think of you as a human being. Not because there aren’t any lines or boundaries. Your corpse is not a body without soul, but an opportunity to click pictures. As many as they can click. It’s similar to how people try to steal crockery from houses burning in a riot. Because after that, what use will you be? At most, 10 pictures, five news pieces, three videos, two stories, one post. That’s it.”

The verse further reads, “That’s why your death will only be a ‘show’ for them. Your crying mother is a show, your heartbroken father who is in deep pain, is a show, your depressed sister, your brother who has lost all hope, anyone who loves you, is a mere spectacle. It would have been another thing had you been alive. After you, your crying loved ones are who will quench their thirst. I’m just saying that this is the life you and I have chosen. Maybe you will regret it a little less if you accept this fact while you’re alive. That’s why you should stay happy with your friends, love your people, learn new things, make new relationships. Just don’t live for them. Whatever time you have left, live for yourself. Because for them, you aren’t even human.”

Earlier, when the news of Sidharth Shukla’s demise has broken, Anushka had consoled the actor’s death in an Instagram post. “Rest in peace Sidharth Shukla. My heartfelt deepest condolences to his family and friends,” she had written.

Check out Zakir Khan’s post which was reshared by Anushka Sharma here:

For the unversed, this is not the first time Anushka Sharma has taken a dig at the paps for allegedly invading the privacy of celebrities. Back when she was pregnant, she has called out a media outlet for clicking pictures of her husband, cricketer Virat Kohli and her unwinding on their Mumbai’s home’s balcony.

As for Sidharth Shukla, the actor bid farewell to the world on Thursday morning in Mumbai. While the exact reason behind his demise has not been revealed yet, several reports stated that the 40-year-old actor died due to a heart attack. He was cremated on Friday at Oshiwara crematorium this afternoon. His mortal remains were brought from the Cooper Hospital- Mumbai in an ambulance decorated with flowers. Sidharth’s mother Rita Shukla, sisters and rumoured girlfriend Shehnaaz Kaur Gill, who was accompanied by her brother Shehbaz were present at the crematorium.

Several other stars including Bollywood actor Varun Dhawan, Rajkummar Rao, Maniesh Paul, among others reached at late Sidharth’s residence to pay their last respects on Thursday.

Sidharth was 40 when he breathed his last. Mumbai’s Cooper hospital confirmed his death to ANI. According to one of the hospital officials, around 9:25 am, he was brought dead to the hospital on Thursday. However, the exact reason behind his demise has not been revealed yet.

The actor last appeared on reality shows ‘Bigg Boss OTT’ and ‘Dance Deewane 3’ with Shehnaaz Gill. The late star rose to fame with the hit TV shows ‘Balika Vadhu’ and ‘Dil Se Dil Tak’. He also shared screen space with Alia Bhatt and Varun Dhawan in the 2014 hit film ‘Humpty Sharma Ki Dulhania’. The actor was also seen alongside Diljit Dosanjh in the 2018 movie ‘Soorma’. He recently tasted success with his stint on the reality show ‘Bigg Boss 13’, where he emerged as the winner. The actor’s last screen outing was Ekta Kapoor`s insanely popular show ‘Broken But Beautiful 3’ in which he played the role of Agastya.