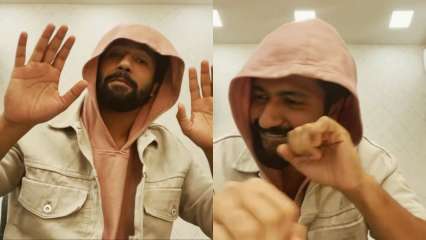 There is no denying that Vicky Kaushal is a Bollywood heartthrob. With countless people drooling over him, the actor enjoys a massive fan following on social media. Vicky on Sunday (July 19) treated his fans with a goofy yet adorable video of himself jamming to Sofi Tukker’s ‘Purple Hat’ rap in his vanity van.

Taking to his Instagram handle, the actor shared a short clip in which he can be seen lip-syncing on `Purple Hat.` Imitating the whole rap with ease, the actor’s post left many astonished. In the video, Vicky is wearing a baby pink coloured hoody and a beige jacket over it.

Impressed with Vicky’s rapping skills, Hrithik Roshan praised him in the comments. “Woah. I like,” he wrote with raising hands emoji to which Vicky replied, “@hrithikroshan woah!!! You like. I dead.” The ‘Uri’ actor also amazed Ayushmann Khurrana and Kriti Sanon who dropped fire emojis in the comments.

Vicky’s fans also hyped him up and praised him in the comments. “Dayum boy! That was good,” wrote one user while another wrote, “You don’t have to feel cute. You are cute okie.” Many fans even asked Vicky to not delete the video, referring to his caption.

Earlier in the day, Vicky showed off his painting skills too as he shared a picture in which he was holding a small canvas that had Lord Ganesha painted on it. The actor looked his charming self dressed in a white t-shirt, tinted shades and swoon-worthy curly hair.

Meanwhile, on the work front, Vicky, who recently completed nine years in Bollywood, is busy working on Aditya Dhar’s film ‘The Immortal Ashwatthama’. He also has ‘Sardar Udham Singh’ and ‘Mr Lele’ in the pipeline.

Did Vicky Kaushal and Katrina Kaif secretly have a ‘roka’? Find out the truth here