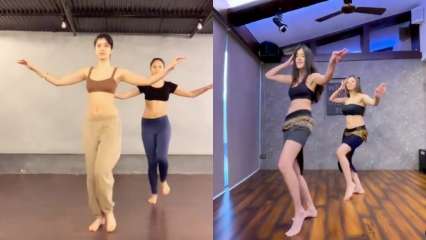 Sanjay Kapoor and Maheep Kapoor’s daughter, Shanaya Kapoor might not have made her Bollywood debut, but the star kid is a social media sensation already. Apart from her stunning pictures, Shanaya often treats her fans with belly dancing videos. Her latest video has her fans going gaga over it, however, her bestie Navya Naveli Nanda’s reaction will make you ROFL.

On Tuesday (July 13), Shanaya uploaded a video where she is practising belly dancing with celebrity belly dance trainer, Sanjana Muthreja. Shanaya can be seen in a dark brown sports bra and light brown jogger pants as she delivers the perfect belly dance moves.

“How we learn a choreography #practicesessions with the best!!! @sanjanamuthreja,” she captioned her post.

Reacting to Shanaya’s video, her bestie Suhana Khan dropped a lovestruck emoji. Her other BFF, Navya Naveli Nanda wrote, “I got a stomach ache watching this,” to which Shanaya replied, “hhahahaha little (bird and parrot emojis)”. Sanjay Kapoor dropped a heart emoji in the comment section while Seema Khan wrote, “Yeah baby.”

Fans also showered Shanaya with love and praises. “Wow !!! Talented shanzhi!!! All he best for your debut!!! You are going to rock it,” wrote one user while another commented, “You are so amazing.” A third user commented, “So beautiful shnaya ur dance moves,” while a fourth user wrote, “OMG just wowwwww.”

This is not the first time Shanaya has shared videos of her belly dancing with fans. Earlier Shanaya uploaded a video where she could be seen belly dancing to Shakira’s ‘Hips Don’t Lie’.

Not just belly dancing, the talented star kid is also learning classical dancing. Have a look:

On the work front, Shanaya is set to make her Bollywood debut with a Dharma Productions project following the footsteps of other star kids like Alia Bhatt, Janhvi Kapoor and Ananya Pandey. Shanaya has joined Karan Johar’s talent management agency, Dharma Cornerstone Agency.

Sharing the news of her first film on Instagram in March, she wrote, “Woke up today with the most grateful heart! Here’s to a great journey ahead with the Dharma Cornerstone Agency family. Excited to kickstart my FIRST FILM (ahh!) this July by Dharma Productions, can’t wait for you all to see what we’re up to! Stay tuned! #DCASquad.”