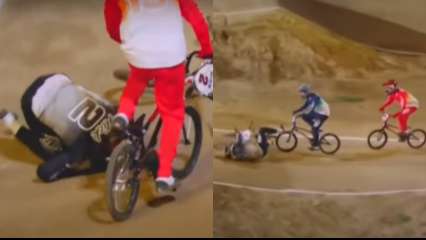 There were rumours circulating on social media a few days ago that Priyanka Chopra Jonas’ husband Nick Jonas had an accident on the set of his shoot.

Get well soon wishes were sent to the artist from fans and admirers all over the world. Nick later verified that he was involved in a bike accident and is recovering well.

A video of Nick from a pre-recorded event has recently gone viral. Nick’s fall from the bike was shown. We can see him competing with his older brothers Joe Jonas and Kevin Jonas in the video.

Priyanka Chopra came to LA from London shortly after his accident to present the Billboard Music Awards 2021 with her husband.

Post the event, she penned a heartfelt note for Nick. Sharing a mushy pic, she wrote, ”Husband appreciation post”

“Not even a cracked rib can stop this force of nature. So proud of you baby. With everything you do! Your work ethic, your pursuit of excellence! You inspire me everyday! Crushed it today! I love you so much!”

She was most recently seen in Rajkummar Rao and Adarsh Gourav’s film ‘The White Tiger’ and also with Farhan Akhtar and Zaira Wasim in Shonali Bose’s ‘The Sky is Pink.’

‘You’re gorgeous’: Netizens are in love with Priyanka Chopra’s no-makeup selfie, photo inside