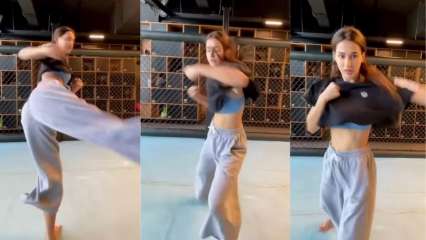 Disha Patani is one of Bollywood’s hottest actresses. She is known for setting the internet on fire with her hot beach and bikini photos where she flaunts her sexy and toned figure. To maintain her figure and be fit, Disha goes through rigorous workouts and shares photos and videos on her social media.

On Sunday (September 5), Disha shared a video where she can be channeling her Inner Kung-fu Panda. The actress was dressed in grey coloured track pants paired with a blue sports bra and loose black crop t-shirt.

In the video, Disha first showcased her kickboxing skills, and then she kicked and flipped twice in the air. The song ‘Flixterr’ from Naruto played in the background. For the unversed, Disha is a huge fan of Naruto. She shared the video with a monkey emoji.

Reacting to the video, Disha’s rumoured boyfriend dropped clapping emoji, fire emoji and lovestruck emoji in the comments section. Fans also showered the actress with love and compliments. “Beautiful Smiles among other things,” wrote one user while another commented, “Fantastic Disha that flow with the kicks @dishapatani.”

A third user wrote, “Lady tiger,” while a fourth one commented, “We got our new kung-fu panda.” Another user even credited Tiger Shroff for Disha’s superb moves. “Tiger shroff ka sangath ka asar,” the user wrote.

Earlier, Disha had shared a video of her climbing a stack of mattresses and then delivering a perfect backflip. Ayesha Shroff, Suzanne Khan and Alisha Singh were impressed with Disha skills. The ‘Baagi 2’ actress shared the video with a bird face emoji. Have a loot at the video here:

On the work front, Disha was last seen in ‘Radhe: Your Most Wanted Bhai’ opposite Salman Khan. She will soon feature in Mohit Suri’s ‘Ek Villain Returns’ which also stars Tara Sutaria, Arjun Kapoor and John Abraham.