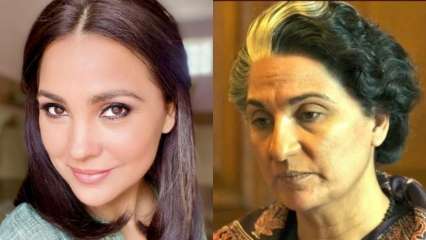 Ever since the trailer on Akshay Kumar starrer ‘Bellbottom’ dropped on Tuesday, all that social media users have been talking about is Lara Dutta and her dramatic transformation to essay the role of former PM Indira Gandhi in the upcoming film.

A spy thriller set in 1984, Bellbottom’s adrenaline-packed trailer does complete justice to the buzz around the film and promises an epic adventure full of world-class action, retro swag, a foot-tapping background score, massive production values, and Akshay Kumar’s action persona at its best.

And while the trailer may have blockbuster written all over it, 46-year-old Lara Dutta’s look as Indira Gandhi piqued the interest of the fans in the film and left netizens in awe of the former beauty queen, and rightfully so.

Lara Dutta is agreeably unrecognizable in the trailer of Bell Bottom. Her makeup, voice modulation and body language, everything is on point.

Soon after the trailer released, #LaraDutta started trending on Twitter and acquired one of the tops spots on the trends section on Tuesday evening.

“OMG… this is Lara Dutta, our Miss Universe. She nailed it… looking forward for this movie,” tweeted a user, while another wrote: “Is she Lara Dutta? Unrecognisable”. “My goodness! She is Lara Dutta!” exclaimed a Twitter user.

Not just Lara, netizens even lauded the make artist for doing a fantastic job and said the next-level work surely deserves an award already.

Take a look at some of the tweets:

OMG this is #LaraDutta our Miss Universe.. she nailed it.. looking forward for this movie.. #BellBottomTrailer pic.twitter.com/56xyul28d6

OMG  is she #LaraDutta ?? unrecognizable… next level makeup.. the makeup artist deserves an award for this outstanding work.. pic.twitter.com/iuE32y5E50

“As you all know that the film deals with a hijack situation that happened during her tenure. Given the dramatic events that were unfolding, she was somebody who was extremely centred and not really prone to any dramatics. So it was important to portray her in that form. I had a great time. There was a lot of homework and research that went behind it. But it was an opportunity of a lifetime that I’m thankful for,” she added

Meanwhile, this Akshay Kumar starrer slated for a big-screen release on August 19, is all set to regale audiences in a 2D and 3D format. While the news of the film’s theatrical release has cheered the industry as well the audiences, the trailer has raised the excitement level of the fans many notches higher. The eagerly-awaited spy drama seems all set to revive the fortunes of the film industry and regalvanise big-screen magic!