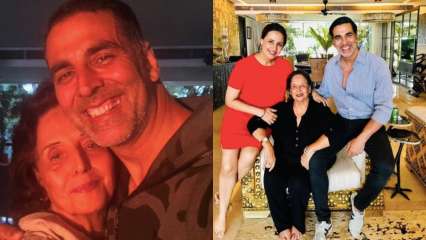 Actor Akshay Kumar immediately flew back to Mumbai from the UK on Monday (September  6) after learning about his mother Aruna Bhatia’s ill health who is in a critical condition. Aruna is currently admitted to the Intensive Care Unit of Mumbai’s Hiranandani Hospital.

Akshay is facing tough times and took to Instagram on Tuesday (September 7) to urge everyone to pray for his mother’s health. He shared a note which read, “Touched beyond words at your concern for my mom’s health. This is a very tough hour for me and my family. Every single prayer of yours would greatly help.” He shared the note with a folded hands emoji.

Several Fans and members from the Indian film industry have poured in prayers for the speedy recovery of Akshay’s mother. Actor Nushrratt Bharuccha commented, “Praying sir,” while singer B Praak wrote, “Always Praying For You And Family Paaji Aunty Ji Will Be Fine Soon.”

“Praying for your mum…she’ll be all good. Really understand where you stand right now @akshaykumar because my mother too was really ill months back. Thankfully her health improved. Will do a special puja for your mum at home,” wrote a user while another commented, “Don’t worry a bit nothing will happen to her…..GOD WILL HELP US ALL.”

For the unversed, Akshay was shooting for a new film in the UK for the past couple of weeks. Also, the ‘Pad Man’ star has reportedly told his producers to carry on shooting with scenes that do not require his presence. He was last seen in the spy thriller ‘BellBottom’, which also starred Lara Dutta Bhupathi, Vaani Kapoor and Huma S Qureshi. The film was the first major Hindi movie to release in theatres after the second wave of COVID-19.

Akshay has an amazing line up of films ahead of him. He will next be seen in ‘Raksha Bandhan’, Sooryavanshi’, ’Atrangi Re’, ‘Prithviraj’, ‘Bachchan Pandey’, ‘Ram Setu’, ‘Cinderella’ and ‘OMG- Oh My God! 2’