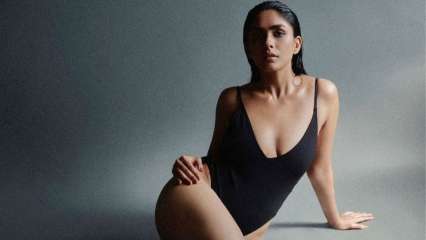 Mrunal Thakur is enjoying the success of her recently released film ‘Toofaan’ where her performance as a simple doctor was applauded by critics and viewers alike. Recently, the actress has been setting the internet on fire with her photoshoots portraying her sensual looks.

On Tuesday (August 24), Mrunal shared a photo of herself in a hot black monokini with a plunging neckline. In the photo, Mrunal can be seen in a monokini from Beg Borrow Steal Studio as she sat and made a pose on the floor. Her hair was sleekly pulled back over her shoulders.

Have a look at the photo here:

Fans also showered Mrunal with love and praises. “Speechless,” wrote one user while another commented, “So pretty friend.” A third user wrote, “Sexy bebs,” while a fourth one commented, “Very beautiful.”

Mrunal Thakur started her career as a TV actress and is know for her role in the show ‘Kumkum Bhagya’. She then forayed into films with the international film ‘Love Sonia’ which released in 2018. She made her Bollywood debut in 2019 with ‘Super 30’ starring opposite Hrithik Roshan. Mrunal will next be seen opposite Shahid Kapoor in sports drama ‘Jersey’. She also has ‘Aankh Micholi’ and an untitled Telugu project by Hanu Raghavapudi in the pipeline.