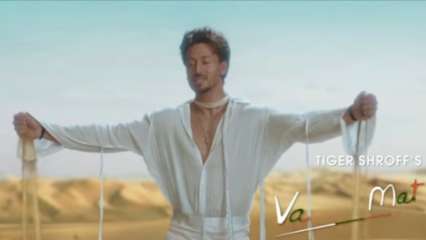 Jackky Bhagnani’s music label, Jjust Music along with Tiger Shroff have released a heartwarming song to pay a tribute to the defence forces and every Indian national, with the reprised Hindi version of ‘Vande Mataram’. Tiger Shroff has himself voiced the song, as he makes his debut in Hindi music.

Jackky Bhagnani took to his social media and shared, “This one’s dedicated to the Defence Forces of our glorious Nation and its people. With great honour and pride, we present to you this special tribute – #VandeMataram (Link in bio) “

Before releasing the song, Tiger went live on his Instagram to chat with his fans and followers. Speaking about the song, Tiger Shroff shared, “This one’s dedicated to our glorious nation and its people. It has been an unexplainable journey to make this happen. With great honour and pride, I present to you my first ever Hindi song-#VandeMataram This will always be very special and close to my heart. (Link in bio)”

With the backing of Jackky Bhagnani, Tiger Shroff and Remo D’Souza, the song will tug your heartstrings. The song is a perfect tribute to the ones who came forward and helped the ones in need.

Only last year Jjust Music paid a tribute with its first song to the nation, titled ‘Muskurayega India’ which uplifted spirits of millions. Some of the many in the trail of songs by Jackky Bhagnani music production company are ‘Prada’ featuring Alia Bhatt, Jaaye Be by Ammy Virk, Jugni 2.0.

Helmed by Remo D’Souza, the song marks Tiger Shroff and Jackky Bhagnani’s first collaboration as singer-music producer, even before they come together as actor and producer for the movie ‘Ganapath’.