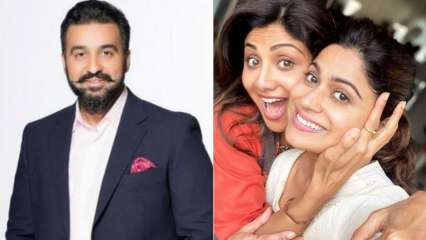 With her husband, businessman Raj Kundra, mired in a case of allegedly peddling pornography, Shilpa Shetty put up a brave face and made a fervent pitch for her film, ‘Hungama 2’. Clearly, she doesn’t want the controversy to singe the film’s prospects.

The actress took to Instagram to urge netizens to watch the film, which was released digitally on Friday. She said ‘Hungama 2’ was the outcome of the “relentless efforts of an entire team” and that the film “shouldn’t suffer”.

The film has Paresh Rawal and Shetty playing the principal characters.

“I believe in and practise the teachings of Yoga. The only place where life exists is the present moment, NOW,” the actress stated in her Instagram post. “Hungama 2 involves the relentless efforts of an entire team that’s worked very hard to make a good film, and the film shouldn`t suffer ? ever!” Shetty added. Requesting her Instagram followers to watch her film, the actress added using a folded hands emoji: “So today, I request you all to watch Hungama 2 with your families to put a smile on your face and for the sake of every single person attached to the film.”

Soon after, Shilpa’s younger sister Shamita Shetty came out in her support and reposted her Instagram post urging fans to watch ‘Hungama 2’ and wrote alongside it, “All d best my darling Munki for the release of ur film Hungama after 14 years I know Uve put in a lot of effort into this one.. the entire team has !.. love you and with you ALWAYS Uve gone through a lot of Ups n downs in life and one thing I know for sure .. Uve emerged stronger!… this too shall pass my darling. All the best to the entire team of #hungama2.”

Meanwhile, a Mumbai Court on Friday sent Raj Kundra and his associate Ryan Thorpe to police custody till July 27 in connection with a case related to the production of pornographic films.

Mumbai Police told the Court that they suspect money earned from pornography was used for online betting.

“This is why transactions between Raj Kundra’s Yes bank account and United Bank of Africa account need to be investigated,” Mumbai Police told the Court.

Raj Kundra was arrested by Mumbai Police for allegedly creating pornographic films and publishing them through some mobile applications on Monday night (July 19).

The Mumbai Police on Tuesday informed that the Property Cell of its Crime Branch had so far arrested a total of 11 people, including Kundra for their alleged involvement in the crime.

“He appears to be the key conspirator. We have sufficient evidence regarding this,” Mumbai Police Commissioner Hemant Nagrale had said. The case was registered with Crime Branch Mumbai in February 2021 about the creation of pornographic films and the use of apps.