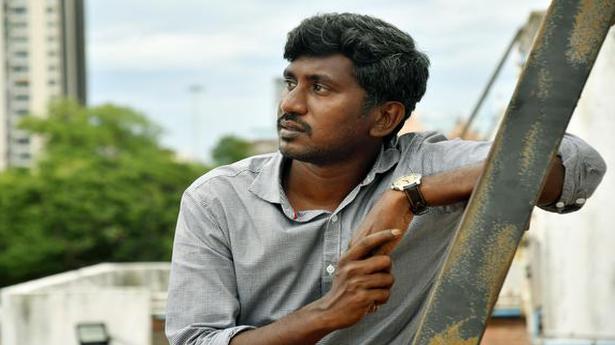 In conversation with Thamizhprabha, whose debut novel, Pettai, captured life on the margins of the Cooum with raw intensity

It is hard not to be reminded of one of his many characters from Pettai when striking up a conversation with Thamizhprabha. Like the women and men in his debut novel published by Kalachuvadu in 2017, Thamizhprabha is raw, honest and unapologetically plainspoken. The 350-page Tamil novel, the English translation of which is under way, is a startling revelation of arguably one of the most stereotyped localities in Chennai — Chintadripettai.

Through some powerfully drawn characters, Thamizhprabha effortlessly breaks many myths about the place, laying bare before the reader a life that is rich and robust, despite the depressing day-to-day mundanities. Pettai is particularly about the Dalits living on the banks of the Cooum in Chintadripettai.

“Chintadripettai is dominated by Dalits but not confined to them; and Pettai speaks about Dalit life there. I have often wondered why the oppressed are often forced to live on the margins — on the banks of Cooum in this case. Pettai is somewhat of an answer to many questions within.”

As someone who grew up in Chintadripettai, Thamizhprabha brings to Pettai a refreshing originality that not many literary works on Chennai and its people can boast of.

The 33-year-old writer, who is also co-penned the dialogue and screenplay for Pa. Ranjith’s next film on boxers in North Chennai, points to the intrinsic bias against the marginalised that has almost always existed in mainstream literature.

“I have often felt that when the rickshaw-puller or street vendor comes forward to tell their stories in their own language, we will get an entirely different version. If you think Pettai is original, it’s exactly because of this.”

Dalit writers and storytellers, Thamizhprabha says, have more than one job to do. “We cannot just stop with telling our stories. We have to break all the clichés that exist about our lives in literature and cinema.”

Pettai does that with unmatched eloquence. The novel speaks aggressively to its reader without being loud. It tells the story of a family residing in Chintadripettai, their neighbours and friends, and through their story offers a prismatic view of their language, food, culture, and sports. In doing so, Pettai also puts forth how their lives are deeply interwoven with the politics of our times.

So, if beef as a dish in many varieties, including kavaabu (kebabs), is much-loved in Rooban’s family, it turns into an unexpected tool of discrimination in the IT company that he works for. For Thamizhprabha, it’s partly his own experience. “I worked in an IT company for 12 years and even though I was not writing back then, I was sensitive enough to realise that I was being discriminated against only because of my beef-eating habit. Later, when I became a writer, I had to turn the food that was used to discriminate against me into an art form.” Just like the Madras dialect that Thamizhprabha generously employs in his novel.

Politics of song and sport

Pettai speaks about Gana music as an art form and how Chintadripettai is among the earliest places in Chennai where Gana thrived and survived. “The singers render songs, maybe not as professionally as Carnatic musicians, but they carry a raw emotion in their voice.”

Pettai also speaks about how Christianity has made their lives better, but not without taking a swipe at men who use religion to manipulate people. “Growing up there, I have been witness to both. I cannot say one thing and leave another unsaid,” Thamizhprabha says.

The novel shows how the carrom board can be a tool of development and in that sense deeply political. A professional carrom player, Lawrence discovers his son’s friend Bala’s talent in the sport and takes him to Masila, the coach.

In Thamizhprabha’s novel Pettai, the carrom board is a tool of empowerment

Bala soon becomes an international player and restarts the Ambedkar night-school in Chintadripettai. In a tightly built climax that attempts to unravel many knots, there is also this achingly beautiful portion about Bala’s father standing in the terrace looking down at the locality that had once ridiculed his family as thevuda soru (a pejorative given to people who buy leftovers cheap from restaurants).

Pettai is at once a story of hope and determination. It’s as celebratory as it is complex. It is a demonstration of the innate strength of humans when confronted with the most difficult challenges. Like the deeply devout Regina who waits for her husband to be dragged to the policestation to expose the wrongdoings of Pastor Ebenezer. Or the not-much-talked-about Bala who gambles only to later use the money to set up the night-school.

“My characters are not perfect,” says Thamizhprabha. “I do not want to bring a political correctness to my characters that would otherwise not exist. If I do that, I will be influencing their lives as a writer.”

But the women of Pettai — from Kiliyambal who we only know through the reminiscences of her friend Nagomi to the meek Evangeline whose determination prevails in the end — easily stand out for their toughness and resilience. “That’s how they are, the Dalit women. They face the twin oppression of caste and misogyny. They have to be extraordinarily strong to survive both,” Thamizhprabha says.

Like the many characters in his novel, Thamizhprabha loves challenges. Working on Pa. Ranjith’s Salpetta is one such. “We have written the script and screenplay together. He offers a comfortable space for me to work. But it was challenging in that we have to work on a story set in the 1970s.”

Thamizhprabha is also ready with his next novel, which has a woman as the protagonist and is again set in Chintadripettai. “They might ask why I continue to write about Chintadripettai, but there are many stories that still remain to be told.”

The writer is a Chennai-based independent journalist.

Ananya Panday is a ‘hot mess’ in brown bikini, shows off her toned body...

‘Don’t you have any sense?’: Samantha Prabhu reacts to reporter asking her about separation...