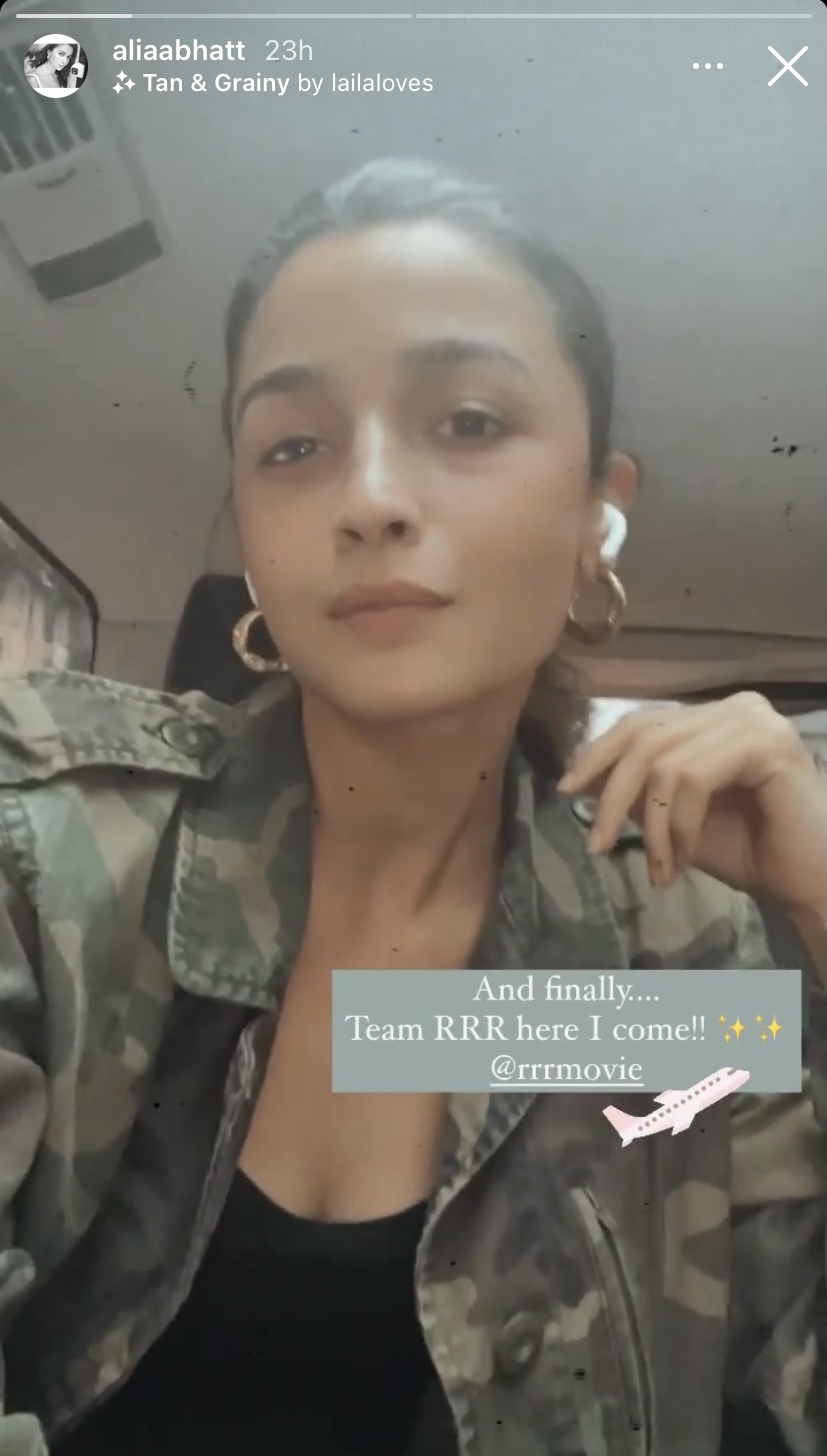 Alia Bhatt has been extremely busy the past few weeks. She recently wrapped up the shoot for ‘Gangubai’ and also started with her maiden production venture, ‘Darlings’. Now, the actor is back on the sets of the pan-India film ‘RRR’ and treated fans with a gorgeous selfie.

Alia Bhatt took to Instagram on Tuesday (July 20) to share a photo of herself in the car. She was dressed in a camo jacket paired with a white t-shirt. Her hair was tied in a sleek ponytail and she completed her look with a pair of golden hoop earrings. “And finally…Team RRR here I come!! @rrrmovie,” she wrote in the caption.

On Wednesday morning, Alia treated her fans with another photo, this time clicked in the mirror. In the picture, clicked at 6:41 am Alia could be seen getting her hair and make-up done as a big Tumblr or coffee could be seen in front of her. “Rise and shine,” she captioned the photo.

Last week, Alia shared a sneak peek of the behind-the-scenes of ‘RRR’. While sharing the almost two minutes long video, she wrote, “Making of RRR. A glimpse into the world of RRR @RRRMovie Happy to have been part of such an energetic team #RoarOfRRR #RRRMovie.”

Last month, the makers of ‘RRR’ shared that the shoot of the film has nearly wrapped and only two songs are yet to be shot. The movie boasts of an ensemble cast comprising Telugu stars Ram Charan and Jr. NTR along with Bollywood stars Alia Bhatt and Ajay Devgn. Alia will play the role of Sita and her first look from the film broke the internet back in March.

A fictional take on the lives of celebrated Indian freedom fighters Komaram Bheem and Alluri Sitarama Raju, ‘RRR’ has been shot across locations in Hyderabad, where massive sets have been erected to take the audience to another era. RRR’s production and post-production are taking place at the same time.

SS Rajamouli’s magnum opus, ’RRR’ is set for a release in Telugu, Hindi, Tamil, Malayalam and Kannada amongst many other languages. Produced by DVV Danayya on the DVV Entertainment banner, the film has reportedly been produced on a massive budget of ₹450 crores.