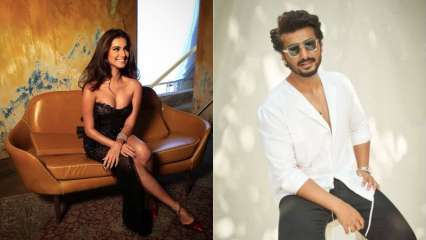 Actors Arjun Kapoor and Tara Sutaria have resumed the shooting for their next film, ‘Ek Villain returns’. Both the actors took to their social media handles on Thursday (July 8) to share that shooting of the next schedule of the film has begun.

Taking to her Instagram, Tara shared a BTS picture from the sets of the movie. In the photo, the director of the film, Mohit Suri can be seen with a mask on. In front of him is a clapperboard that has ‘Ek Villain Returns’ written on it.

While sharing the photo, she wrote, “Villain Mode On! #EkVillainReturns shoot resumes.”

Arjun Kapoor reacted to Tara’s post and wrote, “Aye villain,” in the comment section. To this Tara replied saying, “@arjunkapoor Tu villain… ( this could go on for days )”

Arjun, who is busy with the promotions of his upcoming film ‘Bhoot Police’ also shared the same post. The movie also stars John Abraham and Disha Patani in the lead roles. The film went on floors on March 1 in Mumbai, and the first schedule was shot with Disha and John. The second schedule of the movie was shot with Tara and Arjun in Goa.

Tara reportedly will get to sing a song in the film, besides essaying a role. ‘Ek Villain Returns’ is the sequel of the 2014 Bollywood film ‘Ek Villain’ which featured Sidharth Malhotra, Shraddha Kapoor, and Riteish Deshmukh in the lead roles.

Released in 2014, ‘Ek Villain’ revolved around the story of a hardened criminal whose terminally ill wife was murdered by a serial killer. Starring Sidharth, Shraddha, and Riteish in lead roles, the movie was a box office hit.

Apart from the ‘Ek Villain Returns’ sequel, Tara will be next seen in ‘Tadap’ with Sunil Shetty’s son Ahan Shetty who will be marking his Bollywood debut with the film. Meanwhile, Arjun will be next seen in ‘Bhoot Police’ which also stars Saif Ali Khan, Jacqueline Fernandes and Yami Gautam.