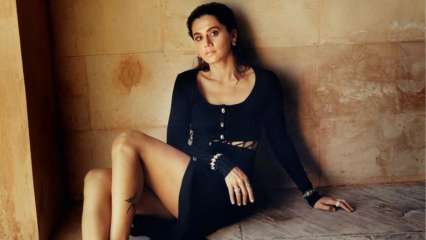 ‘Rashmi Rocket’ is all set to have a direct-to-digital release, an Industry source has shared. The Taapsee Pannu starrer is a sports-drama film directed by Akarsh Khurana and produced by RSVP. The anticipation and excitement for this film have been high from the time it was announced.

An industry source who does not wish to be named shared, “Rashmi Rocket is going for a direct-to-digital release for a big Rs 58 crores amount! This is the highest for any female-centric film we have seen that is releasing digitally. We are yet to hear more details about this one but given the content-driven landscape of the industry that we are witnessing, it looks promising.”

Taapsee has been regularly updating the audience through her training videos and the effort she has been putting which has created a lot of excitement. This would be her solo release after ‘Thappad’. Producer Ronnie Screwvala has been producing a lot of content for the digital platforms and has a great line-up of films ahead.

The shoot for this RSVP film had begun in November last year and ended this year in January. The team shot for the film in Ranchi. Taapsee plays an athlete, a country girl who dreams of winning an International athletic contest.

Taapsee Pannu’s sister Shagun has ‘seen a lot of locations’ for actor’s wedding, says ‘recce has been done’

Taapsee Pannu rings in birthday on sets of ‘Blurr’, shares breathtaking photo with note ‘last week has been tough…’