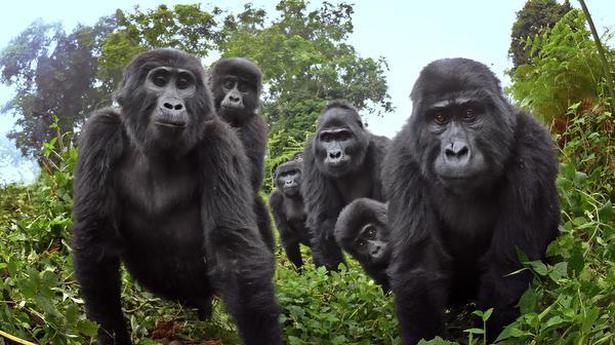 Swimming with otters, flying with butterflies and hanging out with mountain gorillas… the series shoots dramatic encounters in the animal kingdom with revolutionary cameras

Sony BBC Earth has helmed programmes studded with extraordinary stories and stunning photography to bring the natural world into our homes. A variety of creatures, habitats and peculiar behaviours have been laid bare to viewers for decades, while simultaneously underlining conservation and care of the planet. In Spy In The World II, the channel explores wild habitats across the world — polar, temperate, tropics and oceans — with a focus on mass animal gatherings as its lifelike spy creatures fitted with cameras infiltrate communities.

The four-episode series rides on the popularity of the Spy, brought alive in BBC-style clipped pronunciation. Made more than a decade ago, it used robots with miniature cameras to capture even intimate footage such as how animals respond to grief.

Over phone from the UK, series producers Philip Dalton and Matthew Gordon speak about how to best film these stars of Nature with animatronic spies.

Dalton, also the cinematographer for the series, has been a wildlife filmmaker for over two decades, starting with the BBC Natural History Unit. Instrumental in developing and operating the specialist cameras, his work has taken him to some of the world’s remotest locations.

“The concept of spy cameras has been around for 20 years now,” says Dalton. “It was used for closely shooting a pride of lions in Kenya. The camera was embedded in a mobile rock and the ‘bouldercam’ gave us the first intimate shots, in a manner not possible with traditional cameras, on how a pride behaves. Since then, the cameras have evolved.”

The animatronics have for eyes ultra-high-definition spy cameras that allow them to film the surroundings. Created in labs, the animatronics are an amalgamation of zoology, robotics and art, equipped with sensors and are remote-controlled. The designs are detailed so as to not evoke suspicion in the animals and if they do, hardy enough to handle their curiosity.

Agents of the wild

“Fitting cameras in the eye socket of the animatronic is a challenge. The gamechanger was when we were filming penguins in Antarctica in 2013. We were able to give viewers a penguin-side view,” says Dalton.

This series has 50 remote spy creatures. “The technology enables operation from a distance of several kilometres, as long as the spy creature is in direct line of sight,” adds Dalton. “Some require 25 metres, some two kilometres. It depends on whom we are filming.”

While there has been damage from suspicion, few spy creatures have been lost over the years. “The creatures’ behaviour is tailored to the animal, and sometimes it is urinated upon by the animals so the odour helps. The acceptance is remarkable,” says Dalton.

Matthew Gordon has been working in the wildlife film industry for nearly 15 years, producing the iconic Penguins-Spy in the Huddle and Dolphins- Spy in the Pod. This series warranted three years work across the world, from filming orangutans in the jungles of Borneo to sea otters in Alaska.

Matthew Gordon with an orangutan in Sumatra

“Research and development to make the cameras and the spy creatures takes upto three months depending on how complicated they are,” says Gordon. “The focus is filming iconic animals of the region, like the mountain gorillas of central Africa. Getting the right animal and instigating its behaviour is key.”

With a crew of three-five people, filming is most difficult in the open sea in winter. “The spy creature needs to be water-proof too. When icebergs float into view, the creature is not in direct line of sight and signal is lost. We’ve had crew in white bodysuits crawling behind icebergs with transmitters,” says Gordon with a laugh.

The sledge-hammer, was however, filming at world’s end in South Georgia Island in the South Atlantic for the earlier series. “We’d sailed thousands of kilometres from the Falklands; were cut off and filming the king penguin and elephant seal in treacherous seas. But it was worth every bit of it to intimately see how they live,” adds Dalton.

In our fractured age, it is the spy creature, perhaps, that will bring us closest to a vast, varied and little-known world.