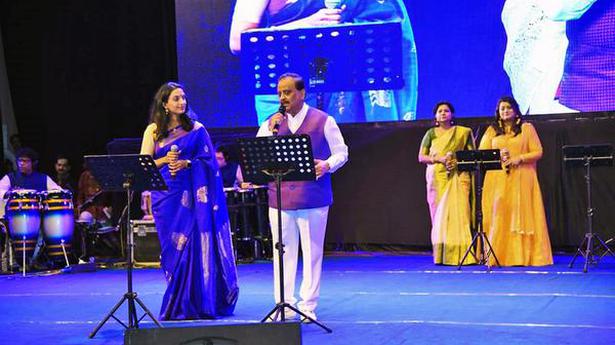 From the mid-1970s, his voice dominated the Kannada screen for nearly three decades, singing playback for almost all leading men of the times

S.P. Balasubrahmanyam leaves behind a huge body of work in Kannada, including an entire generation of singers who consider him mentor and inspiration.

The very second song SPB sang for a film, just a week after his debut in Telugu, was in Kannada in December 1966 and he went on to have glorious innings as a playback singer in the Kannada industry till his death.

From the mid-1970s, SPB’s voice dominated the Kannada screen for nearly three decades, singing playback for almost all leading men of the times. His voice became synonymous with that of Srinath, Vishnuvardhan, Ambareesh, Anant Nag, Shankar Nag, Ravichandran to Shivarajkumar and Ramesh Aravind. There are actors whose entire discography is probably sung by SPB alone. Vishnuvardhan was one such, as the actor was insistent on it, industry insiders say.

“The unique quality of SPB was that he never imitated but tweaked his voice to suit the actor he sang for. It always sounds as if I was singing it myself. He brought that magic to playback singing. Audience listening to songs on a radio would immediately not just identify it was SPB’s voice but also who he was singing for,” observed Srinath.

Shivarajkumar, one of the actors whose songs have been sung by SPB from his debut, said, acting for songs was always a challenge and listening to songs recorded by SPB was work half-done. “He was a great actor and he brought it out in his voice.”

His most celebrated collaborations were with music composer duo Rajan-Nagendra in the 1970s and early 1980s, followed by Hamsalekha. “I attribute the success of the music of my first hit Premaloka entirely to SPB. I wanted to try new voices for that album, but failed. Then I opted for SPB, which I was not happy about in the beginning. But once he sang those songs, I realised what he brought to the table and I had a long collaboration with him,” Hamsalekha recalled.

SPB won a national award for a Tansen song in “Sangeeta Sagara Ganayogi Panchakshara Gavai” in 1995, for which music was composed by Hamsalekha. “He was hesitant to sing songs in the film as they were based on classical ragas. But given that both of us were not trained in classical music, we experimented and that fetched a national award,” recalled Hamsalekha.

The music reality show “Ede Tumbi Haaduvenu” he hosted on ETV Kannada from 2003 to 2012 took him to every home and increased the intimacy of the relationship he had with Kannadigas. Writer and lyricist Jayant Kaikini, who was a judge on the show for over three years, recalls the way he encouraged participants, especially children. “When a child sang well, he used to often say they were singing far better than he had sung in the film, without any ego,” he observed.

What also earned SPB a special place in the hearts of Kannada audience was that he learnt Kannada, spoke fluently and was keen on the pronunciation of every letter in a song. He was even critical of the industry bringing “outsiders who did not focus on language” to sing for Kannada films. Kannada always held a special place for SPB and he always reminded people that the affection was mutual and even said Kannadigas perhaps loved him more than the audience in any language including his native tongue Telugu.

He was presented the Karnataka Rajyotsava award in 2008 and had won four State film awards for best playback singer (male) apart from a national award for a Kannada film.

‘On the Basis of Sex’ and ‘RBG’, films on Ruth Bader Ginsburg, getting re-release in US

Carrie Underwood and Thomas Rhett tied at the ACM Awards, and people are not happy