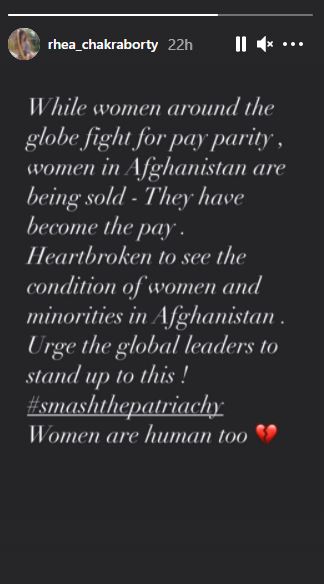 Bollywood actress Rhea Chakraborty on Monday expressed concern over the ongoing turmoil in Afghanistan. The diva who will be next seen in the upcoming film ‘Chehre’ also starring Amitabh Bachchan and Emraan Hashmi, took to her Instagram Story to express her concern for the citizens of Afghanistan, especially women.

“While women around the globe fight for pay parity, women in Afghanistan being sold…They have become the pay. Heartbroken to see the condition of women and minorities in Afghanistan,” Rhea wrote.

It must be noted that the words ‘smash the patriarchy’ had become synonymous with Rhea last year when she was snapped wearing a t-shirt with that slogan printed on it while appearing before the police in the Sushant Singh Rajput death case in which she was the prime accused.

Meanwhile, non just Rhea, several other stars too expressed concern for the devastated state of women in Afghanistan.

“Shame on humanity…while the world just sits and watches this in silence,” actor Karan Tacker wrote on his Instagram Story. Filmmaker Shekhar Kapoor has also raised concern over the situation. “Special prayer for the people of Afghanistan. A nation wrecked and destroyed by the colonial ambitions of foreign powers. #Afganistan,” Kapur tweeted.

Other members of the film industry, including Swara Bhasker, Richa Chadha, Anurag Kashyap, Sanam Puri, and Hansal Mehta have also come out to share their views about the same.

In the meantime, after the tragic state of affairs that unfolded in the last few days in Afghanistan, President Joe Biden on Monday said he “stood squarely behind” his decision to withdraw U.S. troops from Afghanistan and rejected broad criticism of the chaotic withdrawal that is posing a crisis for him.

Biden blamed the Taliban’s takeover of Afghanistan on Afghan political leaders who fled the country and the unwillingness of the Afghan army to fight the militant group. He has also blamed his predecessor, former President Donald Trump, for empowering the Taliban and leaving them “in the strongest position militarily since 2001.”

The decision to withdraw sparked criticism from allies and adversaries after the Afghan government collapsed within days and the United States scrambled to evacuate American civilians and embassy employees from Kabul.

“I stand squarely behind my decision,” Biden said in a speech at the White House. “After 20 years I’ve learned the hard way that there was never a good time to withdraw U.S. forces. That’s why we’re still there.” “The truth is: this did unfold more quickly than we anticipated. So what’s happened? Afghanistan political leaders gave up and fled the country. The Afghan military gave up, sometimes without trying to fight,” Biden said.

The Democrat has faced a barrage of criticism, from even his own diplomats over his handling of the U.S. exit, pulling out troops and then sending back thousands to help with the evacuation. Biden also said his decision is a result of the commitment he made to American troops that he wasn’t going to ask them to continue to risk their lives for a war that should have ended long ago.

“Our leaders did that in Vietnam when I got here as (a) young man. I will not do it in Afghanistan,” he said. “I know my decision will be criticized but I would rather take all that criticism than pass this decision on to another president.”

The United States and allies invaded following Sept. 11, 2001, attacks on New York and Washington and toppled the Taliban who had hosted al Qaeda militants responsible for the attacks.