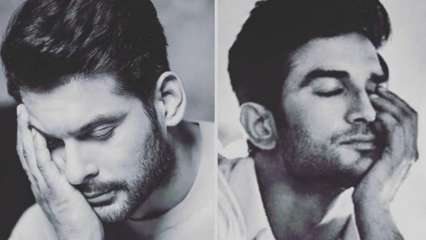 The actor reportedly suffered a heart attack and was brought to Mumbai’s Cooper dance, the same hospital where the mortal remains of SSR were brought. Now, an old photo of Sushant with Sidharth has gone viral leaving both their fans emotional and heartbroken.

In the viral photo, Sidharth was dressed in a white shirt while Sushant wore a yellow coloured t-shirt. In the candid picture, both the actors were could be seen having a conversation and sharing a smile.

The snap was shared by a fan on Twitter with the caption, “Legend’s gose without saying anything.” Have a look at the post here:

Sushant Singh Rajput died by suicide and was found dead in his Bandra flat on June 14 last year. Sushant and Sidharth were good friends and often partied together. Both started their career as TV actors and later went to star in films. Sidharth has featured in Varun Dhawan and Alia Bhatt’s film ‘Humpty Sharma Ki Dulhania’.

Sidharth Shukla was a multi-talented personality who not only did daily soaps but also hosted reality shows besides Bollywood projects. He was best known for his role of ‘Shivraj Shekhar’ in ‘Balika Vadhu’.

In a career spanning over 15 years, actor Sidharth Shukla won many hearts with his charming looks, acting prowess, and strong persona both on-screen and off-screen. Fans and friends took to social media to mourn the actor’s demise.

Even after his demise, he is being remembered for the way he showed his acting skills in the serial. Besides this, he also did ‘Dil Se Dil Tak’, ‘Bigg Boss 13’, ‘Fear Factor: Khatron Ke Khiladi 7’ and hosted shows like ‘Savdhaan India’.

‘I know what I stood for’: Ankita Lokhande opens up about being trolled after Sushant Singh Rajput’s death