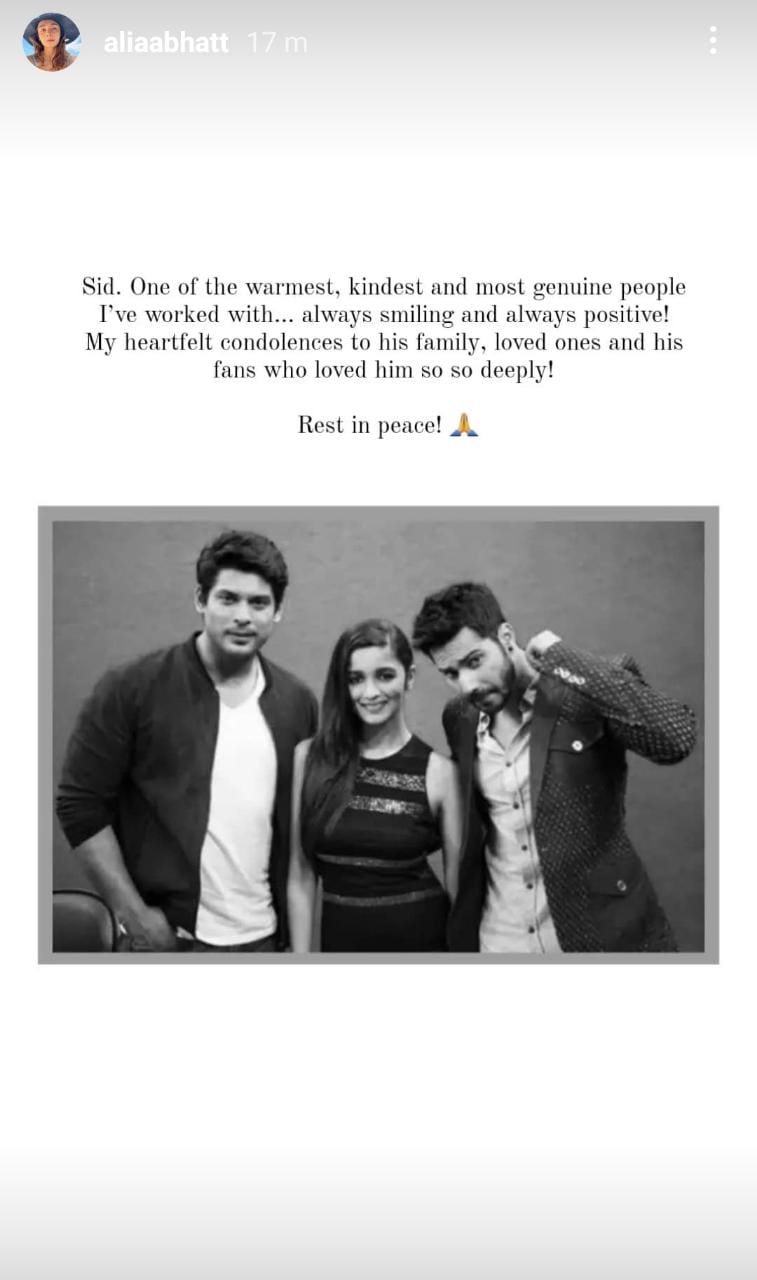 In an unexpected turn of events, the industry is mourning the demise of Sidharth Shukla of ‘Balika Vadhu’. Sidharth died after suffering a heart attack, which was confirmed by the Cooper Hospital in Mumbai, where he was sent for emergency treatment.

His ’Humpty Sharma Ki Dulhaniya’ co-stars, Alia Bhatt and Varun Dhawan have also taken to their Instagram to mourn the loss.

Alia Bhatt took to her story and penned a note which read, “Sid. One of the warmest, kindest, and most genuine people I’ve worked with…always smiling and always positive! My heartfelt condolences to his family, loved ones and his fans who loved him so so deeply! Rest in peace!”

Take a look at her story here-

Varun Dhawan on the other hand posted a photo of Alia, him and Sidharth along with a solo portrait of Sidharth. He captioned the post as “Rip brother u are loved by so many and u touched so many with ur kind heart and beautiful personality. Today heaven has gained a star and we have lost one. My deepest condolences to the family and loved ones”.

Sidharth Shukla made his acting debut opposite Aastha Chaudhary in the 2008 show ‘Babul Ka Aangann Chootey Na.’ He went on to star in a number of TV shows and became a household celebrity. He made his Bollywood debut in the Varun Dhawan and Alia Bhatt starrer ‘Humpty Sharma Ki Dulhania’ in 2014.

When Sidharth won the reality series ‘Bigg Boss 13’ and ‘Fear Factor: Khatron Ke Khiladi 7,’ he captured the hearts of his admirers. With his victories, his reputation grew, but he remained one of the most humble celebrities to date.

For the unversed, Sidharth made his digital debut alongside debutante Sonia Rathee in ‘Broken But Beautiful 3’.