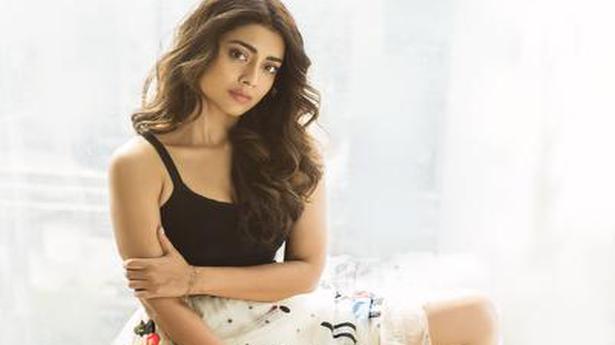 When we exchange messages to fix a time for this interview, actor Shriya Saran who is now based in Barcelona lists three dance class schedules the following day. She has been using the COVID-19 downtime to get back to her Kathak classes. “There’s uncertainty around film shoots this year, so I’ll look forward to starting something new in 2021,” she says over the phone. However, she had completed shooting for five films before the pandemic set in. Among them is Gamanam directed by Sujana Rao, slated to release in Telugu, Tamil, Kannada, Malayalam and Hindi.

Inspired by real-life incidents. Gamanam explores how a turn of events affects different people in a metropolis. Without revealing much, Shriya says the concept is universal and can work in different languages.

Life in a metro

It all began on the sets of Gautamiputra Satakarni (2017); during a casual conversation with cinematographer V S Gnana Shekhar, Shriya expressed her interest to collaborate: “One fine day he asked if I’d listen to a story, and then put me on to Sujana. As Sujana narrated Gamanam, I had tears. It’s an unconventional but commercially viable film. I don’t know if cinema can change society, but if it can make us show some empathy, that’s a good start,” says the actor.

Shriya plays a de-glam role and appreciates how Sujana and Gnana Shekhar, who co-produced the film, stuck to what the story warranted and did not worry about abiding by a formula: “It’s the second time I’ve worked with a female director, after Deepa Mehta (Midnight’s Children; 2012). There’s depth and fire in Sujana’s writing. She wrote the story one night and it’s powerful; I hope it reaches a wide audience,” she says.

She is not allowed to discuss the storyline but emphasises that it was a tough film to shoot since many of her scenes involved shooting in water, “Gnana Shekhar is an artist and the play of light in his cinematography is interesting.”

As she holds forth on Gamanam, Shriya recalls that occasionally she has taken up non-mainstream films: “I did Midnight’s Children and Cooking with Stella when I was at the peak of my career. Bommalatta/A Belly Full of Dreams (2006, National Award-winning film directed by Prakash Kovelamudi and co-produced by Rana Daggubati and Gunnam Gangaraju) wasn’t seen by everyone but it was a beautiful project,” she recalls.

At the other end of the spectrum, Shriya is also a part of S S Rajamouli’s film RRR. “I have a small part, and I loved reconnecting with Rajamouli sir after Chatrapathi (2005). Even back then, I could see that he was driven by a passion for cinema. I think as we gain experience, we discover different facets of a personality. I would equate the experience to revisiting a book. I’ve read Autobiography of a Yogi at different ages and interpret something new each time.”

She filmed for RRR when she had visited India last year for a cousin’s wedding. She flew down to Hyderabad for a look test: “Then they told me the shot is ready,” she laughs.

RRR will take a while to release. Meanwhile, Shriya hopes that the Tamil film Naragasooran directed by Karthick Naren, which is long awaiting release, will be available to the audience: “It’s been written and shot so well that if you blink, you miss something.”

Then, there is director Ramana Madhesh’s Sandakkari (Tamil) and Tadka (Hindi), a remake of the Malayalam film Salt N’ Pepper.

Shriya has been in cinema for nearly two decades, straddling multiple languages. Talking about female actors in their 30s calling their shots, she says: “Things change for the better when there are more women in the crew. When I started working, there were times when I was the lone woman on set, apart from my make-up person. My mom would accompany me. Now there are many women assistant directors. Sometimes I get asked if I’m open to working, given that I am married, but with Kajol, Kareena and others showing the way, there’s room for women to take up interesting parts at any age.”

Nithya Menen as a singer in ‘Gamanam’