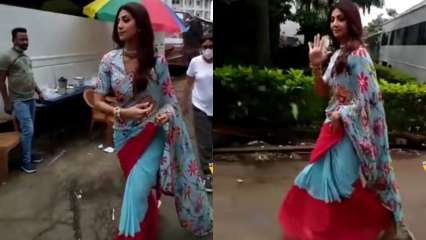 After rumours that Shilpa Shetty has returned for the shooting of ‘Super Dancer 4’, a video of the actress on the sets has now surfaced, therefore confirming that she has indeed resumed her duties as a judge. The actress had taken some time off to take care of the turmoil in her personal life after the arrest of her husband Raj Kundra in the pornography racket case.

In the video shared baby a paparazzi account, Shilpa can be seen stepping out from her vanity van and going towards the sets. Shilpa looked gorgeous in a blue and red saree with floral prints on her pally. She kept her luscious locks open and wore kitten heels.

Recently, the news of Shilpa’s return was confirmed by the show’s producer Ranjeet Thakur to indianexpress.com. Without speaking much on the topic, he added, “She is our judge and she is here to stay.”

A source from the set told the news website that the reality show team always wanted the actress to be back, however, she wanted to take her time. “The makers had been in constant touch with her and only recently she decided that she was ready to make a comeback. Shilpa wants to get back to work not just for her kids and family but also for her own sanity. She was welcomed warmly by the Super Dancer team, which made her quite emotional in the morning,” the source was quoted as saying.

The showrunners had been inviting celebrity guest judges to make up for Shilpa’s absence on ‘Super Dancer 4’. So far, several stars including Karisma Kapoor, Sonali Bendre, Moushumi Chatterji, Malaika Arora have appeared on the show.

For the unversed, Shilpa Shetty’s husband Raj Kundra was arrested last month by the Mumbai Crime Branch on July 19 in a pornography racket. Ever since Shilpa has been keeping herself away from making public appearances and refraining from posting actively on social media. In the latest development in the case, Raj on Wednesday (August 18) was granted interim protection in the pornography racket case.