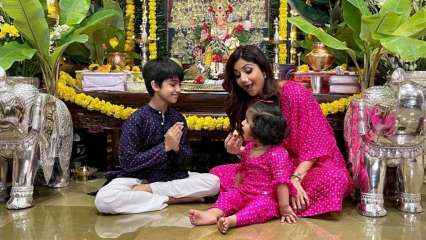 The BTown celebs kick-started Ganesh Chaturthi with full enthusiasm on Friday. Amid the pornography scandal with Raj Kundra, his wife and actress Shilpa Shetty also celebrated Ganpati Bappa with her kids – daughter Samisha and son Viaan.

Shilpa took to Instagram and shared a couple of photos with her children from her Ganesh Chaturthi celebrations. While in one photo Shilpa fed Modak to Viaan, in the other picture she fed the traditional sweet to Samisha. The actress and her daughter were dressed dressed in matching clothes, a pink suit and salwar with white polka dots. Little Viaan was dressed in blue kurta and white pants.

Photos from her outing went viral on social media. Shilpa could be seen in a printed salwar suit and paired her look with oversized pink-tinted sunglasses. The actress was in a festive mood and chanted “Ganpati Bappa Morya!” while taking Bappa to the car. She was surrounded by several fans who also chanted along with her.

Meanwhile, on the work front, Shilpa is busy judging the reality show ‘Super Dancer 4’, alongside Geeta Kapur and Anurag Basu. She was last seen in ‘Hungama 2’ which also starred Meezan Jaaferi and Paresh Rawal. She will next star in ‘Nikamma’.