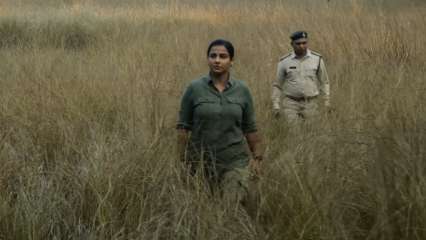 After announcing the OTT release of ‘Sherni’, the makers have dropped the teaser of the Vidya Balan starring film. In the teaser, the actor is seen walking in a jungle with officers and in the background, she is heard talking about the bravery of a tigress. Vidya says, “No matter how dense the jungle… The tigress knows her way.” In ‘Sherni’, the actor plays the role of an upright Forest Officer who strives for balance in a world of man-animal conflict while she also seeks her true calling in a hostile environment.

Produced by T-Series & Abundantia Entertainment, the Amazon Original Movie is directed by the award-winning filmmaker Amit Masurkar known for the critically-acclaimed film ‘Newton’. It is set to stream from June 2021, the official date yet to be announced.

In a statement, Vikram Malhotra, the Producer and CEO of Abundantia Entertainment said, “After the successful and much-loved collaboration for ‘Shakuntala Devi’ in 2020, I am delighted to partner once again with Amazon Prime Video as we take Abundantia Entertainment’s latest film to the world. ‘Sherni’ is one of the most special and important stories that we’ve worked on and Amit’s evocative take on a highly relevant subject, laced with his trademark satire, will make for a compelling watch. I’m also very excited for the fans of Vidya Balan to see her in the unique avatar of a forest officer.