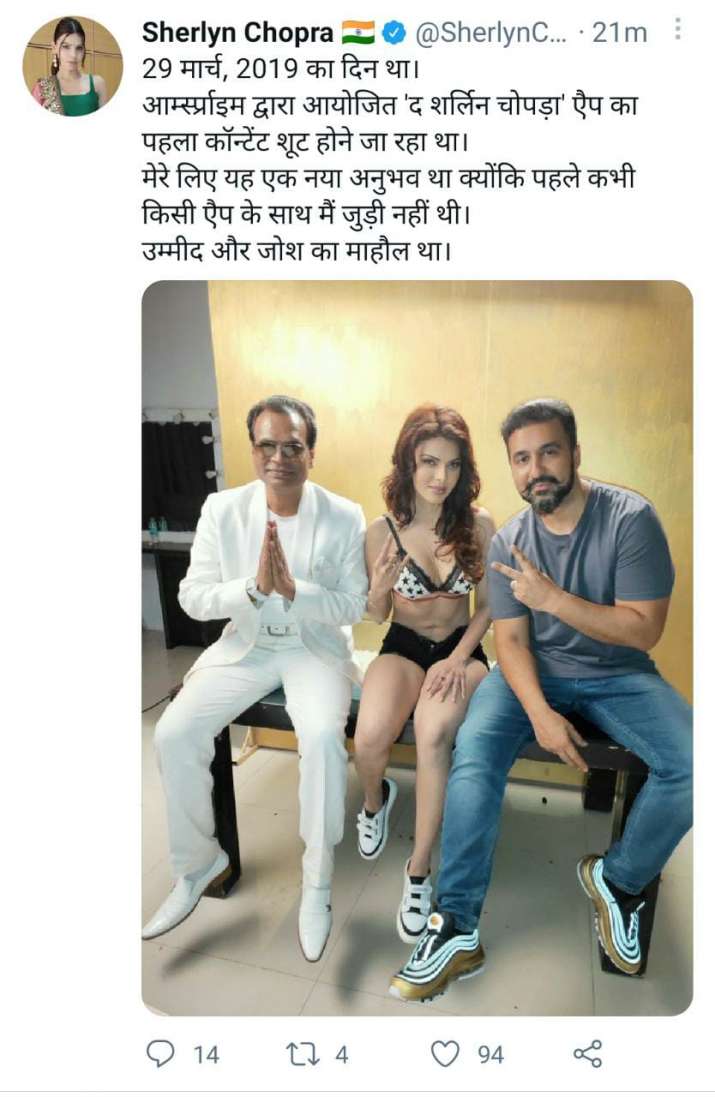 Shilpa Shetty’s husband Raj Kundra was arrested last month in connection with the creation of pornographic content. One actor who has raised her voice and commented on the matter time and again is Sherlyn Chopra. Sherlyn had earlier said that she was “the one who first went to Maharashtra Cyber Crime branch”.

On Wednesday (August 11), in a now-deleted tweet, Sherlyn had shared a throwback photo featuring herself and Raj which was taken on March 29 in 2019 on the first day of the shoot of her app, ‘The Sherlyn Chopra App’. In her tweet, Sherlyn also said that she was very excited as it was her first experience collaborating for an app.

Originally in Hindi, Sherlyn’s now-deleted tweet read, “It was March 29, 2019. The first content shoot of The Sherlyn Chopra app, organized by Armsprime, was going to take place. It was a new experience for me as I had never been associated with any app before. There was an atmosphere of hope and enthusiasm.”

Have a look at the screenshot here:

Sherlyn had also told ANI that Raj Kundra contacted her for making films and she signed an agreement in March this year. She said Kundra wanted different videos in the app, which are glamour, high fashion, fitness, fun and other things. She said the concept was glamour in the beginning and then she was told about “semi-nude and nude films” and added that he had told her that his wife Shilpa Shetty liked her work.

“During the shoot, I was encouraged. They used to say I am doing great and Shilpa has seen your photos and videos and has appreciated my work. And when you get so much praise from the seniors it does not make you feel that you are doing something wrong and it makes you think to do better,” she said.

Kundra was arrested by police on July 19 along with 11 other people on charges related to the alleged creation of pornographic films. Earlier on July 25, police had informed that four employees of Kundra have turned witnesses against him in the pornography racket case.