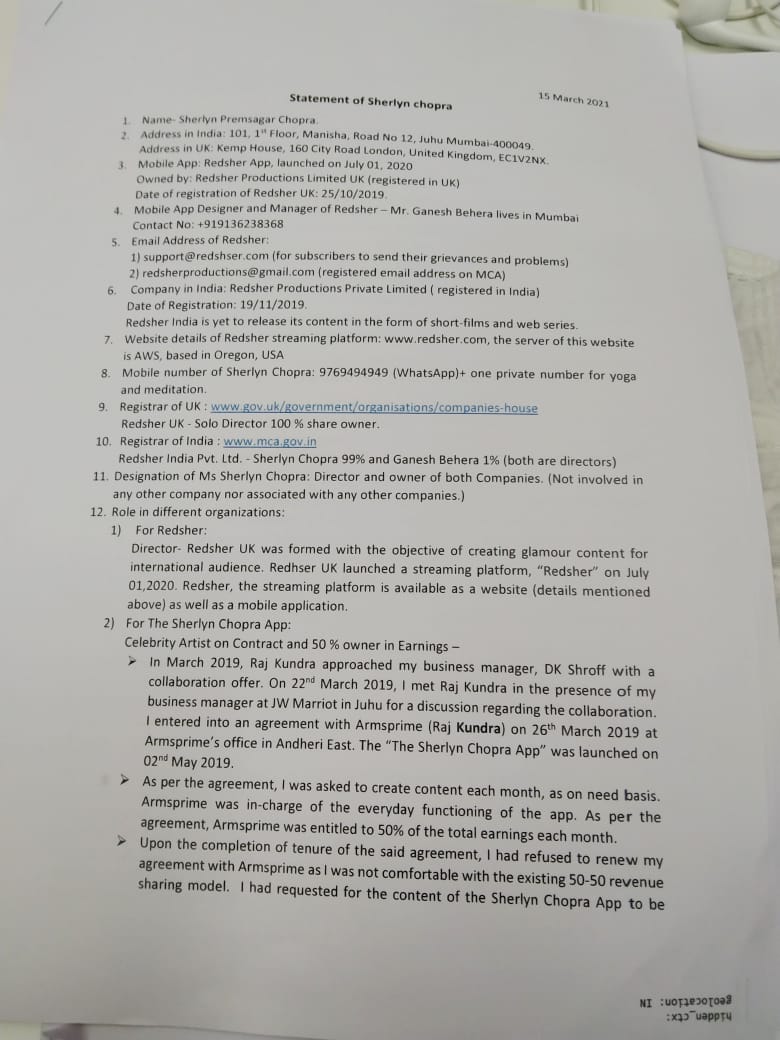 Ever since Shilpa Shetty’s husband and businessman Raj Kundra’s arrest in the creation of pornographic content, several names Bollywood names have come up in relation to the case. Actress Sherlyn Chopra had earlier released a video stating that she was the first person to give a neutral statement to the Maharashtra Cyber Cell, earlier this year.

Zee News has accessed Sherlyn Chopra’s statement to the Cyber Cell which is dated March 2021. Sherlyn has made several explosive revelations about Raj Kundra and her involvement with his business.

In her statement, Sherlyn revealed that she is the owner of two apps, Redsher and The Sherlyn Chopra App wherein the latter was in collaboration with Raj’s Armsprime Media. As per the model-actress, Raj Kundra met Sherlyn in presence of her business manager DK Shroff to discuss the collaboration.

Sherlyn’s statement further said that after the completion of the tenure she ‘refused to renew her contract with Armsprime’ and had requested for the content of The Sherlyn Chopra App to be deleted, however, they are still available on the internet.

Sherlyn also revealed Raj requested Sherlyn to create content for HotShots App but she declined as she found its content to be ‘sleazy and downmarket’.

“During the course of this agreement on several occasions, Raj Kundra had requested that I create content for his application called ‘Hotshots’ to which I refused as I found the content of the application to be sleazy and downmarket,” read an excerpt from her statement.

Sherlyn also said that she got an offer to work in ALT Balaji’s ‘Gandhi Baat’ and other adult web series but turned it down as she was not interested. Sherlyn also mentioned one Meeta Jhunjhunwala who was the creative head at Raj Kundra’s Armsprime Media and also behind Sherlyn’s ‘The Chocolate Video’. In her statement, Sherlyn described how she was not comfortable working with Meeta and has even asked Raj to replace her.

“On several occasions, I got in heated arguments with Meeta regarding the concepts for content creation and execution of the same. On a few occasions, I had asked Raj Kundra to reface Meeta with somebody whom I could work with conformably. Raj Kundra had asked me to keep my differences aside and be professional,” she said.

Sherlyn stated that during her 12 months of association with Raj Kundra and his company she did not face any legal hassles so she was under the impression the content is not “problematic” legally. She revealed that as the first pay-out for The Sherlyn Chopra App, she received a sum of Rs 19,52,622.

Meanwhile, Sherlyn was also summoned by Mumbai Crime Branch’s property cell on Monday (July 26) to record her statement in the case. The Bombay High Court on Tuesday (July 27) ordered that no stern action will be taken against Poonam Pandey and Sherlyn till September 20. Both the actresses had filed a petition for anticipatory bail.