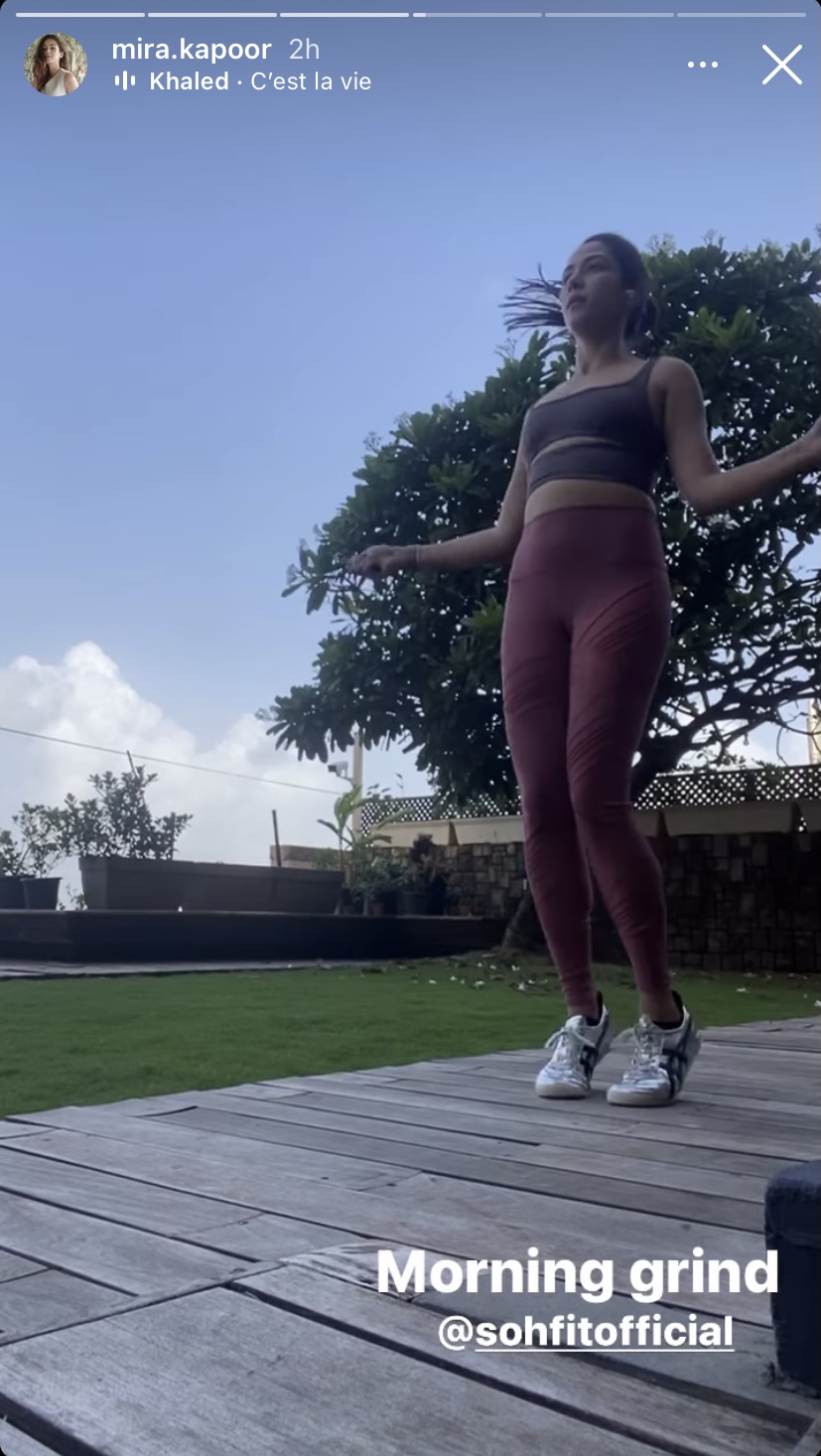 Shahid Kapoor and his wife, Mira Rajput Kapoor are fitness freaks, a fact known by their fans and followers. The couple often works out together and is at times joined by Shahid’s brother, Ishaan Khatter. True to their selves, Shahid and Mira started their Sunday morning with a bang.

Taking to her Instagram stories, Mira Rajput shared a video where she can be seen skipping the rope as Khaled’s ‘C’est la vie’ plays in the background. Dressed in a plum coloured sports bra and maroon leggings, Mira was working out on her patio. “Morning grind,” she captioned her video.

Mira then treated her fans with a post-workout selfie which she captioned, “done.”

Shahid Kapoor also shared a bare-chested selfie which seemed to be clicked after his workout. The actor looked super charming with his tinted sunglasses on. Shahid also exercised on his patio, hinting that the couple kickstarted their Sunday with a powerful workout. While sharing the selfie, Shahid wrote, “Good morning.”

Recently, Mira had shared a photo of her ‘dream team’ on her Instagram which featured her, Shahid Kapoor and Ishaan Khatter. The photo was a post-workout click and the trio looked super chic and trendy in their sporty avatar.

Shahid and Mira have also been giving sneak peeks of their new palatial abode which has taken the internet by storm. The couple has been staying in their Juhu house for the past few years with their kids, Misha and Zain. In 2018, Shahid bought a plush duplex house in Worli which offers a stunning view of the Bandra-Worli sea link.

In an earlier interview with DNA, Shahid said that he purchased the Worli house as “the requirement of the family has changed.” As per reports, Shahid and Mira’s new haven was reportedly bought for Rs 56 crore and also boasts a garden and other amenities like a gymnasium, etc.

Shahid Kapoor shares adorable photos to wish Mira Rajput on her birthday, calls her ‘centre’ of his world

Shenaz Treasury says she was ‘good friends’ with ‘Ishq Vishk’ co-star Shahid Kapoor, ‘didn’t hit it off’ with Amrita Rao

VIRAL! Mira Rajput shares photo of proud parents pointing at her poster in a mall, pic inside