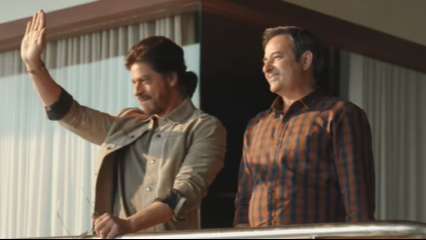 Karan Johar shared a new video of Shah Rukh Khan discussing fellow actors Ajay Devgn, Saif Ali Khan, and Akshay Kumar joining Disney+ Hotstar. Karan Johar uploaded the video, which is an advertisement for the digital platform, on Instagram. The director explained that the actor was experiencing ‘FOMO,’ or fear of missing out.

Shah Rukh stood on his balcony with actor Rajesh Jais by his side, waving to supporters gathered outside his house in the footage. Shah Rukh told Rajesh, “Dekha itne saare fans aate hai kabhi kisi ke ghar ke bahar (Have you seen so many fans gather outside any one’s homes)?” Rajesh replied, “Nahi sir ab tak toh nahi dekha. Par aage ka kuch keh nahi sakte (No Sir, so far I haven’t seen. But I don’t know what will happen in the future).”

Rajesh mentioned Ajay Devgn, Akshay Kumar, Saif Ali Khan, and Sanjay Dutt, prompting an enraged Shah Rukh to ask, “Sab hai kya (Everyone is there)?” “Matlab sab toh nahi hai (Not everyone is there),” Rajesh told him. When Shah Rukh asked him, “Kaun nahi hai (Who is not there)?” he replied, “Sir, aap (Sir you),” with a glimpse of optimism. He then motioned for Shah Rukh to wave to fans

The video ended with a voiceover saying, “Sabse bade stars Disney+ Hotstar pe sab hai siwaye Shah Rukh ke (All the big stars are on Disney+ Hotstar except Shah Rukh). ” As the video came to a close, the words “to be continued” were written on the screen.

Meanwhile, Shah Rukh was most recently seen in Aanand L Rai’s 2018 film Zero. Anushka Sharma and Katrina Kaif also starred in the film. He has recently completed filming on Siddharth Anand’s Pathan and Atlee’s untitled feature, however neither has been publicly announced. Deepika Padukone and John Abraham also star in Pathan.