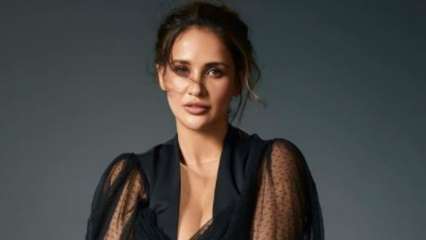 Actress Aisha Sharma who made her Bollywood debut with John Abraham starrer ‘Satyamev Jayate’, has been creating ripples on social media with her latest photos.

On Thursday (August 19), Aisha took to her Instagram handle to share a series of photos from her latest photoshoot wherein she is seen clad in a chic denim Eunice boiler jumpsuit. In the photos, the 32-year old looks irresistible as she flaunts her assets in the unbuttoned outfit striking various sultry poses gazing right into the camera. To complete her look, Aisha left her tresses open in messy waves, opted for minimal makeup in sexy nude and no accessories.

“Can you imagine that there are people who don’t like me, Like me neither but pfff…….. Imagine,” Aisha wrote alongside a carousel of her photos.

As soon as Aisha shared the photos, her sister, actress Neha Sharma took to the comments section and wrote, “How can u always look so hot and cute at the same time.” She used heart-eyed and fire emojis alongside the comment.

Aisha’s fans too left lovely comments for her. “Aishaaaaa on Fire,” wrote a user. “Gorgeous”, “hot”, “queen” were some other adjectives used by Aisha’s fans.

For the unversed, this is not the first time Aisha’s sultry photos have gone viral on the internet. Neither is this the first time she has gone braless for a photo shoot. Earlier too, Aisha had shared some sexy hot pictures from her photoshoot where she was seen clad in just a white shirt dress.  Take a look:

On the work front, Aisha hasn’t announced any new projects as yet.