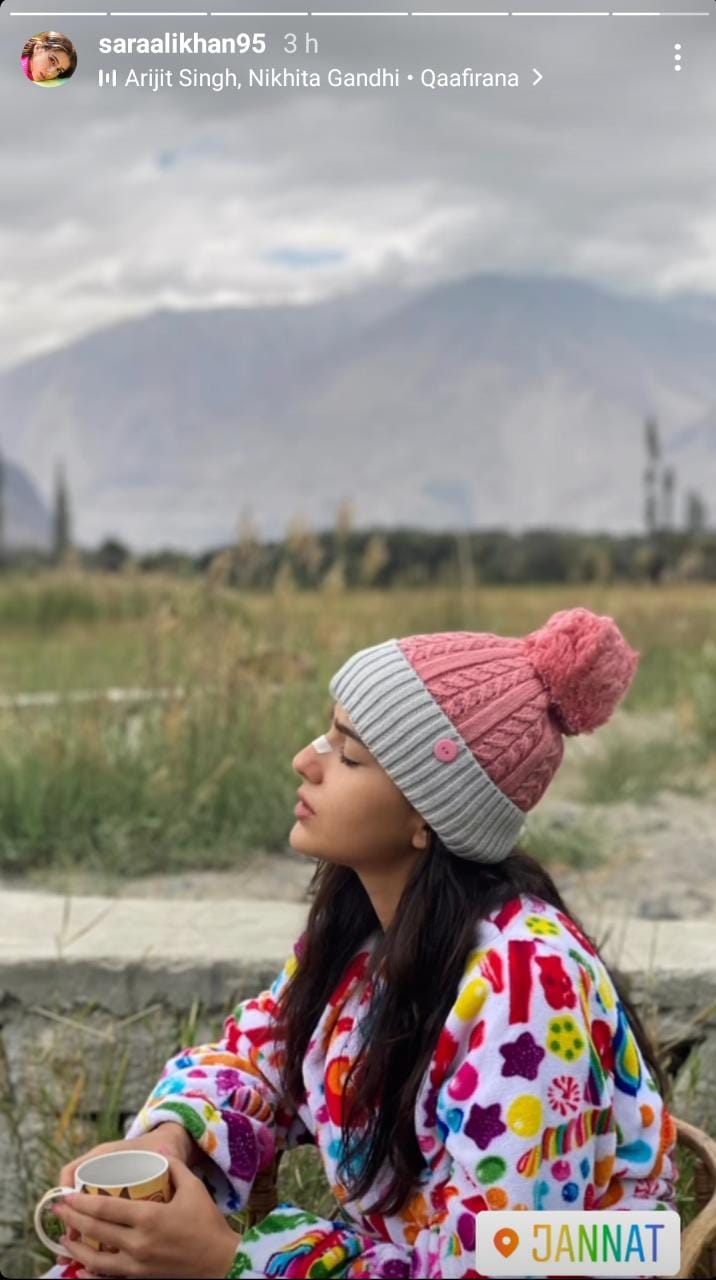 Sara Ali Khan is now on vacation in Ladakh with Radhika Madan, and the two women are having a great time. In reality, the Pataudi princess, who is active on social media, has been on a photo-sharing binge, lavishing fans with stunning images and videos from nature’s paradise. Sara has continued on her current path, and she has once again taken social media by storm by sharing another photo from her holiday.

Sara was spotted taking in the good vibes of nature. In her multi-coloured cosy bathrobe, the actress looked lovely. Her outfit was finished off with a lovely pink and grey beanie. Sara was seen in the photo sipping a hot beverage while admiring the beauty of nature. Aside from that, the bandage on her nose can be seen, indicating that her nasal injury is still healing.

She had also added the song ‘Qafirana’ from her movie ‘Kedarnath’ with Sushant Singh Rajput in the story.

A few days ago Sara had shared news about her nose injury via a funny Instagram post in her set way of knock-knock jokes.

Sara Ali Khan has a number of interesting films in her filmography. The actress will star alongside Akshay Kumar and Dhanush in Aanand L Rai’s ‘Atrangi R’e. She’s also apparently been cast in Aditya Dhar’s ‘The Immortal Ashwatthama’, which stars Vicky Kaushal in the lead role.

Sara Ali Khan was born on August 12, 1995. She is the daughter of actors Amrita Singh and Saif Ali Khan, and was born into the Pataudi family. She is the maternal granddaughter of Shivinder Singh Virk and Rukhsana Sultana, and the paternal grandchild of Mansoor Ali Khan Pataudi and Sharmila Tagore.

Khan dabbled in acting after graduating from Columbia University, starring as the leading heroine in the 2018 flicks ‘Kedarnath’ and ‘Simmba’.

‘Don’t think he is body-shaming me’: Sara Ali Khan looks back on Saif-Kareena’s son Taimur calling her ‘gol’