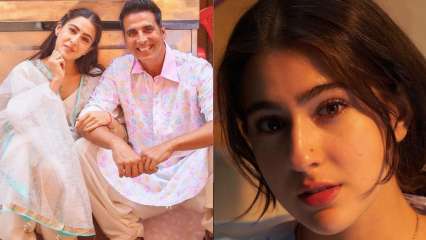 Saif Ali Khan’s daughter Sara Ali Khan, is a natural beauty, one that can take anyone’s breath away. The actor on Thursday (July 8) shared a BTS photo from the sets of her upcoming film ‘Atrangi Re’, which according to Sara was clicked by her co-star from the film, Akshay Kumar.

In the portrait photo, Sara can be seen without makeup as she gazes into the camera with her beautiful brown eyes. Strands of hair fall on her face which shines in warm yellow lighting. While sharing the gorgeous photo, Sara wrote “Thought these days would never end #bts #atrangire.” She also gave the photo credits to Akshay Kumar ‘sir’.

Sara’s fans showered her with love and compliments as they dropped heart and fire emojis in the comment section. “WOW SO PRETTY YOU ARE,” wrote one user while another commented, “    So beautiful mam.” A third user commented, “How can a picture be so peaceful? can’t take my eyes off ,” with heart emojis while a fourth one wrote, “Wow u r the world best prettiest girl ever.”

Directed by Aanand L Rai, ‘Atrange Re’ also stars Dhanush. The shooting of the film was wrapped up in March this year. Taking to Instagram, Sara shared a bunch of BTS pictures with her co-stars.

“That’s a film wrap Ek saal baad Thank you so much @aanandlrai sir for giving me this role, this film and this opportunity. But more than that thank you for your unconditional love, unwavering support, the best India darshan, delicious khana, early morning sunrise drives to location, sufi ginger water evenings, and the most memorable year with the best team @dhanushkraja thank you for always being helpful, motivating and inspiring. Couldn’t have asked for a better partner in this journey  and yes thank you for introducing me to your amazing music and mouth watering varieties of South Indian food (even though we could’ve avoided that indulgence during shoots ) And thank you so much @akshaykumar sir for bringing so much love, laughter, energy and positivity on our set  and sorry for stalking you for photos in all our costumes sir.”

Speaking about the film, Aanand had earlier said, “All the three characters are funnily weird and it’s their emotional journey. I am always looking for partners who are as emotionally touched as I am with the story and all three of them are like that. Every character in this film has its own traits that will put them in an unseen space.”