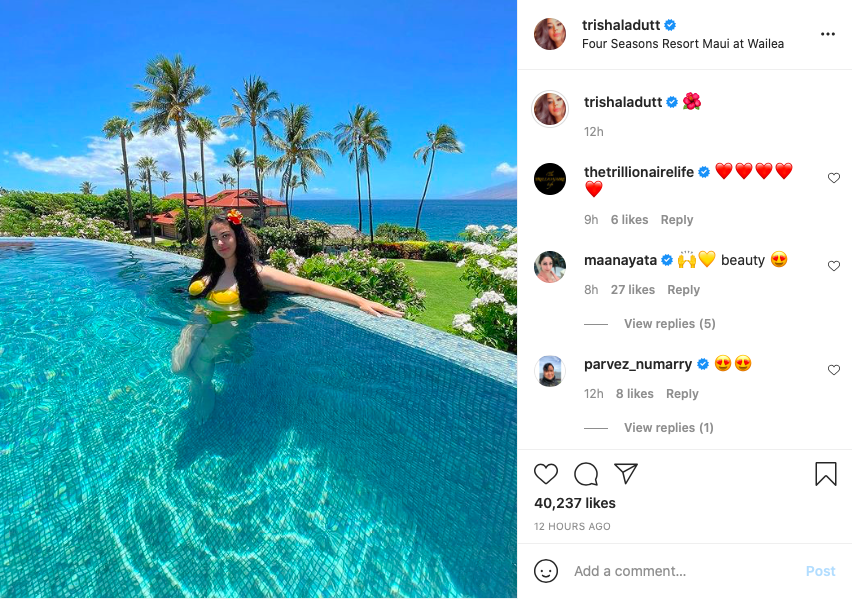 Sanjay Dutt’s daughter Trishala Dutt is has taken tie out from her busy schedule and is currently vacationing in Hawaii. The star kid has been sharing photos and videos from her trip and it is giving fans major vacay goals.

On Wednesday (August 4), Trishala shared a stunning photo of herself chilling in the pool. The photo was clicked at the Four Season Resort Maui and looks right out of a postcard with the magnificent blue ocean, green bushes, palm trees and an exceptionally blue sky.

In the snap, Trishala can be seen in yellow swimwear as she posed inside the pool with her locks open and a flower on her hair giving the perfect Moana vibes. She shared the post with a flower emoji as a caption.

Reacting to the photo, Maanayata Dutt commented, “beauty,” with a heart and lovestruck emoji. Fans also showered love on Trishala’s photo. One user commented, “Water baby,” while another wrote, “This pic has made my day.” A third user wrote, “Beautifull my crush,” wale a fourth user wrote, “You are miss world.”

Have a look at the photo here:

On Tuesday (August 3), Trishala shared another photo from her trip. In the picture, Trishala is dressed in a sexy black coloured swimsuit. She can be seen posing next to the ocean on a bed of rocks with beautiful blue sky, clouds and palm trees in the background. “Aloha,” Trishala captioned the photo with three heart emojis.

Reacting to the photo, Maanayata Dutt dropped heart and fire emojis in the comments. One fan wrote, “Work it girl,” while another commented, “looking fabolous trish, hope ur doing good.”

Trishala also shared some videos of her exotic hotel on her Instagram stories. Have a look:

Trishala is Sanjay Dutt’s daughter from his first wife Richa Sharma who passed away after battling brain tumor. She was raised by her maternal grandparents in US. She is a psychotherapist by profession and is based out of New York. She often conducts Instagram sessions to help people seeking advice on mental health, relationships and more. Sanjay Dutt is now married to Maanayata Dutt and two are parents to twins, Shahraan and Iqra.