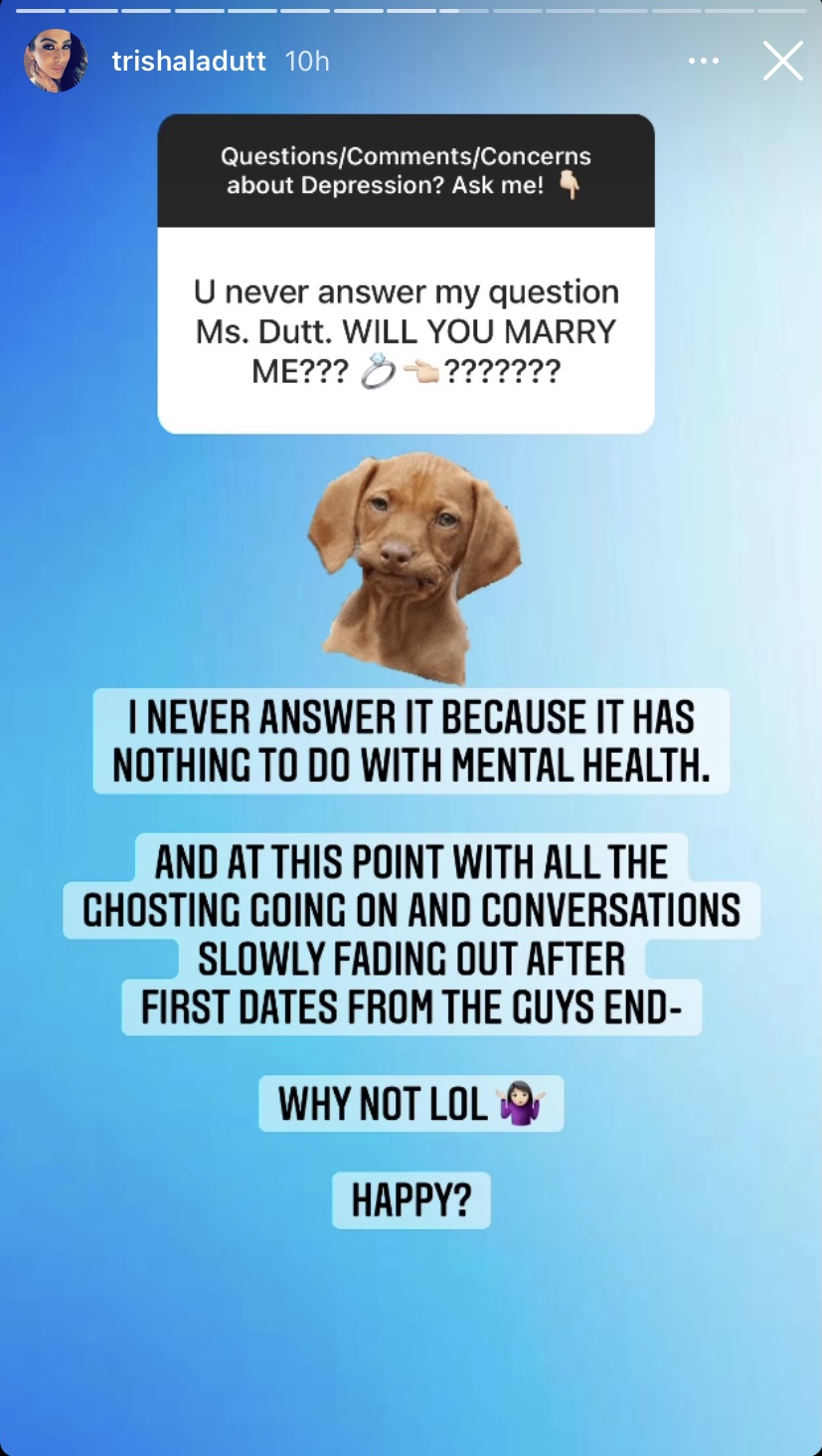 Sanjay Dutt’s daughter Trishala Dutt enjoys a massive fan following on Instagram with over 5.7 lakh followers. Trishala, who is a psychotherapist by nature, often takes to social media to talk about issues surrounding mental health, relationships and more. Recently, the star kid conducted an ‘Ask Me Anything’ session on Instagram where a fan proposed to her. Trishala revealed that her dating life has not been so fruitful lately and jokingly said yes to the proposal.

Trishala on Monday (September 6) took to her Instagram stories and wrote, “questions/comments/quotes about depression? Ask me!” Replying to this, one of Trishala’s fans wrote, “U never answer my question Ms. Dutt. WILL YOU MARRY ME???”

Responding to the Instagram proposal, Trishala answered and wrote, “I never answer it because it has nothing to do with mental health. And at this point with all the ghosting going on and conversations slowly fading out after first dates from the guys end – why not lol. Happy?”

Unlike other star kids, Trishala likes to stay away from the limelight, however, regularly interacts with her fans on social media. It is there that she opens up about her life. During one session last year, Trishala opened about how she dealt with the grief of losing her boyfriend who passed away in July 2019.

“I’m still dealing with it, but I’ve gotten a lot of help for it (and still getting help for it). Since Covid, my support groups that I’ve joined have become virtual for now, I see my grief therapist virtually as well, I spend time with my friends and family (while still practising social distancing) and I’m doing a lot of soul searching,” she had said.

She also talked about her long social media break post the incident as she “needed that private time to process what the hell just happen to both of our lives. How in a split second, life can change for anybody. I needed to feel my loss. Not distract myself from it.”

For the unversed, Trishala is Sanjay’s eldest child with his late first wife Richa Sharma and is based out of New York. She was raised in the United States by her maternal grandparents.