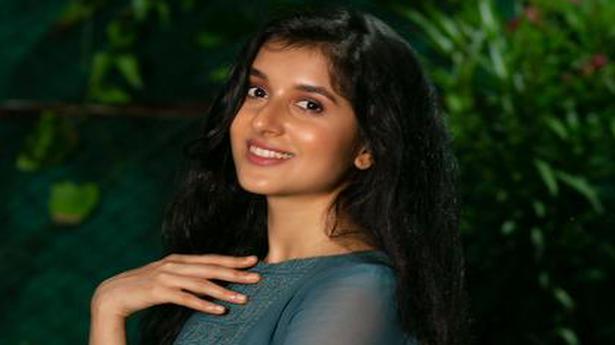 The actor, who stars in Amazon Prime Video’s sitcom ‘Time Enna Boss’, is excited at what the future holds for her, in Kollywood and beyond

Sanjana Sarathy was just a teenager when she appeared in A.R. Murugadoss’ Thuppakki in 2012. The action-thriller starring Vijay was a massive blockbuster and with Sanjana garnering a lot of screen space in the film, many expected to see the bright young Chennaiite make inroads into Kollywood.

However, over the last eight years, the actor has only appeared in a handful of supporting roles; something she attributes to a variety of reasons. But now, as one of the five leads in Amazon Prime’s new ‘time travel’ sitcom Time Enna Boss, Sanjana is back on track.

“I have always loved acting; it complements my dramatic personality in real-life,” she laughs.

“When the chance to star in Thuppakki came my way, I heard Vijay sir’s name and immediately said yes. However, I was still very young then and confused if this could be my full-time career. I took some time to make my decision, and dabbled in styling as well. A few years later, I was convinced that films would be my future; but there was a challenge: Due to Thuppakki’s popularity, everyone still looked at me as a kid; I kept getting offered “sister” roles… it was frustrating,” recalls Sanjana.

She goes on, “Perhaps I also don’t fit the part of the stereotypical, ideal Tamil movie heroine. It took a few years for filmmakers to start accepting girls with different body types and looks. But I’m glad I was patient; it paid off.”

Last year, Sanjana starred in the Zee5 web-series Fingertip alongside Akshara Haasan, in an important role which put her back in the spotlight. Next, she’s also filming for Ninaivo Oru Paravai, in which she plays the lead role: “Hari Baskar, known from Jump Cuts, is the other lead. I can’t wait to get back to work once shooting resumes.”

The actor will next be seen in ‘Ninaivo Oru Paravai’, in which she plays the lead role

Right now though, all her focus is on the release of Time Enna Boss this week, in which she plays Hannah, a singer from 1896, who is transported to 2019 — along with others from different time periods —and mayhem ensues.

“Hannah is a neurotic perfectionist, with a touch of OCD to her. But she also has a soft side, which comes out as she gets to bond with the others stuck in this quagmire with her. All the characters (played by Bharath, Priya Bhavani Shankar, Karunakaran, Robo Shankar and stand-up comic Alex) have different personalities, which is fantastic from a plot perspective. I’m a huge fan of all my co-stars, especially Alex’s timing in Alex in Wonderland; working with them was a blast,” Sanjana quips.

The actor-model is also a quintessential millennial Instagram star, very popular on social media, with her dance videos often trending. “There’s not really any strategy behind what I post; I usually don’t have any filters when I say anything (laughs) and my Instagram persona is pretty much exactly who I am off-screen too.”

She adds, “Like everyone else, I spent the first couple of months during lockdown being lazy and binge-watching, then quickly decided I had to be productive and started working out and doing dance covers to keep myself active. I’m just looking forward to how the audience responds to Time Enna Boss, and working again!”

‘Bigg Boss 14’: Paras Chhabra opens up about dating Pavitra Punia, says she hid her marriage from him