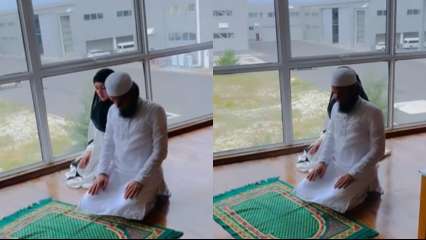 Sana Khan, who left Bollywood’s spotlight to pursue spirituality, recently posted a video to social media. Sana has indicated in this video that she intends to spend time with her husband in Maldives. She appeared to be really delighted during this time.

Sana is seen in the video heading to the Maldives with her spouse. She can be seen swinging and running all around in joy. Sana also stated in the video that flying by sea plane has always been a goal of hers, which has finally come true. Sana Khan did not forget to offer Namaz during this time.

On November 20, Sana Khan married Anas Saiyad. She published a photo of herself on social media and announced her marriage. This unexpected marriage caught everyone off guard. Anas is from the Gujarati city of Surat. Sana Khan’s name has also been altered to Saiyad Sana Khan.

In an interview with Bombay Times, Sana talked about marrying Anas, she said “Getting married to Anas wasn’t an overnight decision. I have prayed for years for a man like him in my life. What I liked best about him is that he is ‘shareef’ (gentleman) and ‘unn mein haya hai’. He is not judgmental,”My husband is a good man and I find him good-looking, maybe you don’t. I don’t care.”

Sana has been part of a few movies . In the Bollywood film ‘Jai Ho,’ released on January 24, 2014, she plays the daughter of the major antagonist Danny Denzongpa. She starred alongside Sharman Joshi and Gurmeet Choudhary in the film ‘Wajah Tum Ho.’ She made a cameo role in the film ‘Toilet: Ek Prem Katha,’ in which she played Akshay Kumar’s girlfriend.