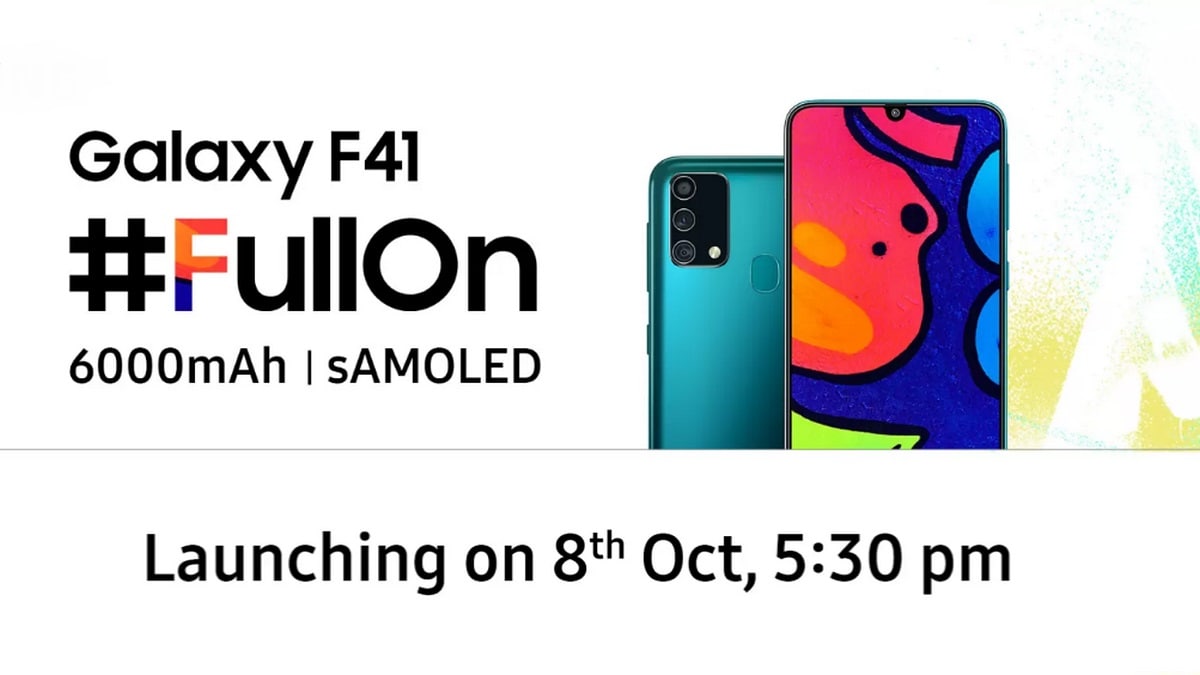 Samsung Galaxy F41 will launch in India on October 8. The phone is going to be the first in Samsung’s newly announced ‘F series’. A dedicated Flipkart teaser page for the phone shows the Galaxy F41 will feature a massive 6,000mAh battery and a Super AMOLED display, and also mentions a couple other details. Last week, the Galaxy F41 was reportedly spotted in a Geekbench listing that hinted at the processor and RAM present in the phone. Additionally, the schematics of the first F series phone, now known to be the Galaxy F41, were also leaked recently.

Samsung will unveil the Galaxy F41 on October 8 at 5:30pm IST, as per a teaser page on Flipkart. The company has not shared if it will be hosting a virtual launch event for the phone. The Flipkart page mentions some of the specifications for the Galaxy F41 including a 6,000mAh battery, a Super AMOLED Infinity-U display, a triple rear camera setup, and a fingerprint scanner on the back. The bezels on the top and sides seem quite slim. The Galaxy F41 will come in a teal-ish colour option.

Last week, a phone with model number SM-F415F, believed to be the Galaxy F41, was spotted on Geekbench. The listing shows the Exynos 9611 SoC, 6GB of RAM, and Android 10.

Furthermore, the schematics shared by a known tipster on Twitter indicated that the Samsung Galaxy F41 will feature a USB Type-C port, a 3.5mm headphone jack, and a single bottom firing speaker. The tipster added that the phone will support fast charging and be offered in two RAM and storage configurations. Additionally, the Galaxy F41 is said to come in three colour options – Black, Blue, and Green.

Rumour has it that the Galaxy F41 may be a rebadged version of the Samsung Galaxy M31 as the schematics for the upcoming phone show a lot of key similarities to the Galaxy M31. It is also believed that the F series phones will be priced between Rs. 15,000 and Rs. 20,000.

As of now, Samsung has not shared details on pricing for the Galaxy F41 and the same can be expected officially on October 8.

Is this the end of the Samsung Galaxy Note series as we know it? We discussed this on Orbital, our weekly technology podcast, which you can subscribe to via Apple Podcasts, Google Podcasts, or RSS, download the episode, or just hit the play button below.

Affiliate links may be automatically generated – see our ethics statement for details.

‘Can we please change this slave name India back to Bharat?’, writes Kangana Ranaut, gets trolled

Eid-ul-Fitr 2021: Crescent moon not sighted in Saudi Arabia, Eid on May 13 in middle-east | Culture News