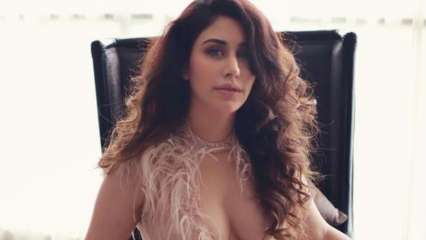 The Taliban’s takeover in Afghanistan and the heart-wrenching visuals of people trying to flee the country in a desperate attempt have sent the entire world in a state of shock and despair. Afghani actress Warina Hussain is, however, reminded of her own traumatic past in the country. Warina was introduced in Bollywood in a Salman Khan production.

The actress made her debut opposite Khan’s brother-in-law, actor Ayush Sharma in ‘Loveyatri’. While speaking to Hindustan Times, Warina narrated how the current situation in Afghanistan reminds her of 20 years ago when the war forced her family to flee the country.

“It’s a difficult time for me and my family. It’s eerily similar to 20 years ago. It was because of this war and turmoil that my family was forced to flee Afghanistan, and now, many years later, I see other families losing their homes,” she said.

After leaving Afghanistan as a child, Warina came to India and has been here for over a decade. But she always remembers the memories of her time in the country.

“My memories will always be of family picnics, food, and a beautiful spring in Kabul, which I doubt will ever be the same again; the only air one will now breathe will be of suppression,” she added.

Warina shared that she understands how difficult it is for a refugee to move from country to country in search of a better life.

“I was fortunate that India accepted me and became my home but I’m afraid that isn’t the case for everyone right now. Such a country’s conditions result in emergency immigration, resulting in thousands of refugees and asylum seekers arriving in neighbouring countries, where immediate accommodation may be difficult,” she said.

Warina feels that all the progress Afghanistan made over the years has gone in vain with the country going back to its old ways. She added, “And with females going back to being just a machine for fertility and the mentalities of the youngsters full of hate and revenge.”

Warina has appealed to other countries to not abandon Afghanistan in these tough times. “And for the United Nations to intervene. It’s the wish and plea of a woman who doesn’t want her fellow Afghan women to be treated as second-class citizens in their own nation,” Hussain concluded.

Apart from ‘Loveyatri’, Warina has also featured in films such as ‘Dabangg 3’ and ’99 Songs’.

Sidharth Shukla gets savagely trolled for his post on Afghanistan crisis, here’s why