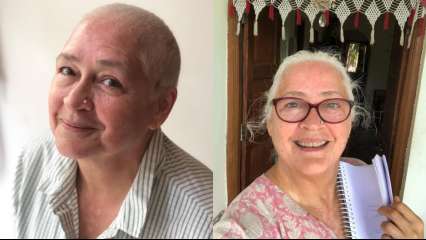 Nafisa Ali, a 64-year-old senior actress and cancer survivor is gearing up to film her latest Bollywood project. Nafisa Ali, who was diagnosed with peritoneal and ovarian cancer in November 2018, declared on Wednesday that she is “cancer in remission” and preparing for her new project.

The actress, who lives in Goa, shared a selfie of herself with a screenplay for her next project, revealing that she was travelling to Mumbai to shoot the film. She expressed herself as follows: “Reading a film script after ages …off to Mumbai to act after years with my cancer in remission. I am so looking forward to a creative medium.”

Nafisa was last seen in ‘Saheb, Biwi Aur Gangster 3’ . She confirmed she had been diagnosed with peritoneal and ovarian cancer a few months after the film’s debut in July 2018.

The former Miss India has been having treatment in Goa after her cancer diagnosis. While undergoing chemotherapy, the 64-year-old star revealed that she was also seeking treatment for leucoderma.

She made it a mandate to update her fans with what had been happening in her life when she got diagnosed.

Former Miss India Nafisa Ali made her acting debut in Shashi Kapoor’s 1979 film ‘Junoon’. She has since appeared in a number of Bollywood films, including ‘Yamla Pagla Deewana’ and ‘Life In A Metro’.