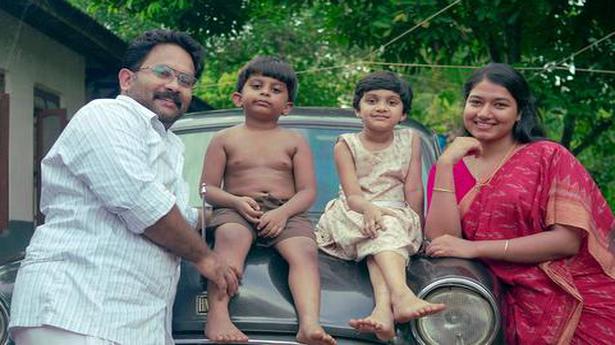 “Food is the soul of this movie. It is certain to make you hungry after you watch it!” says Arun Chandu about his directorial venture, Saajan Bakery Since 1962. Even when there is that question about when and how it will be released, Arun is pleased to have made a movie that is “simple and sweet.”

An “old-world tale” set in Ranni in Pathanamthitta district, the narrative revolves around Shamel Mappila’s Saajan Bakery, which has been named after his only son. Saajan has no interest in running the bakery and tries in vain to find success in other ventures. Marriage to Mary brings in a kind of stability and discipline in his life and their children, Betsy and Boban, run the place with the help of their uncle.

Aju Varghese stars as Saajan and Boban, while Grace Antony is Mary. Lena is Betsy. “There is no love lost between the siblings and the relationship between the two remains the same even when they run the bakery. It is a no-frills movie about their bitter-sweet conflicts, even as it discusses man-woman equation in a subtle way,” says Arun, who has written the story with Aju and Sachin R Chandran.

Arun says that it was easy for them to place the story in Ranni because they were familiar with the milieu. “Aranmula, my home town, is near Ranni. Aju is from Thiruvalla, which is also close by. I have known Aju for many years and when we thought of working together, we decided to locate the story in a place that both of us can relate to. We know the geography, the people and their way of life, their behaviour, lingo…,” says Arun.

Food He says that the nostalgia surrounding bakeries was the reason for such a story. “Bakeries are a constant in everyone’s life. At one point or the other, a bakery would have been a favourite hangout for someone growing up in Kerala. Several fond memories are attached to bakeries as well. We have romanticised that aspect and the food culture,” he says.

Aju Varghese and Lena in a still from ‘Saajan Bakery Since 1962’
| Photo Credit:
Special arrangement

Although the film is a work of fiction, the title is taken from the bakery run by Arun’s friend at Chungappara near Ranni. The frames are organic as most of the sequences were shot in bakeries in Ranni with the art department making some simple additions. “The shoot was done without affecting the daily business at these places. Some of the customers are part of several scenes in the film. The borma featured is run by a friend. The cast and crew were happy throughout the shoot since they were always surrounded by food!” he says.

This is Arun’s second movie, although his début movie, Sayahna Varthakal, has not been released yet. “A socio-political thriller”, starring Gokul Suresh and Dhyan Sreenivasan, it is now in its post-production stage.

Aju Varghese and Lena in a still from ‘Saajan Bakery Since 1962’
| Photo Credit:
Special arrangement

Prashant Pillai, who scored music in Sayahna Varthakal, has composed songs in Saajan Bakery… also. Two tracks have already been released. “I am a huge fan of his work and he has delivered what the film wanted, that too in different genres. If ‘Once upon a time in Ranni’ has a retro flavour to it, ‘Thora mazhayilum’ has romance written all over it. I was thrilled about Vineeth Sreenivasan and Prashant working together for the first time in the latter,” he adds.

Behind the camera is Guru Prasad MC, an associate of Jomon T John in Thattathin Marayathu. Editor is Aravind Manmadhan, recipient of Kerala State Film Award (2018) for Shyamaprasad’s Oru Njayarazhcha.

Arun cannot wait to take the movie to the audience. Produced by Dhyan Sreenivasan and Visakh Subramaniam, it was planned as a Vishu release. “I have done the best from my side. Now it is left to the producers to take a call. I am keeping my fingers crossed!”