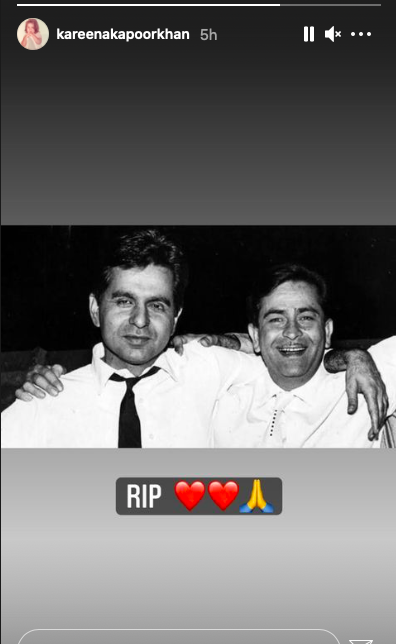 The world lost another bright star today. Legendary Bollywood actor Dilip Kumar breathed his last today at 98. Dilip Kumar had been suffering from breathing problems for some time now and was admitted to Mumbai’s Hinduja Hospital on June 30. The news of Kumar’s demise was shared by his family friend, Faizal Farooqui via his Twitter handle. “With a heavy heart and profound grief, I announce the passing away of our beloved Dilip Saab, few minutes ago. We are from God and to Him we return,” Farooqi tweeted.

Known as the tragedy king of Bollywood, Dilip Kumar has been an inspiration to many. The news of his passing away has saddened the entire film fraternity, who took to their social media handles to extend their condolences.

“An institution has gone .. whenever the history of Indian Cinema will be written , it shall always be ‘before Dilip Kumar, and after Dilip Kumar’ .. My duas for peace of his soul and the strength to the family to bear this loss .. Deeply saddened,” Amitabh Bachchan wrote for hi ‘idol’ late actor Dilip Kumar.

T 3958 – An institution has gone .. whenever the history of Indian Cinema will be written , it shall always be ‘before Dilip Kumar, and after Dilip Kumar’ .. My duas for peace of his soul and the strength to the family to bear this loss ..  Deeply saddened ..

Originally in Hindi, singer Lata Mangeshkar tweeted, “Yusuf Bhai left his younger sister today. An era has ended with Yusuf bhai. I don’t understand anything. I am very sad, don’t have words to say anymore. He left us with many memories.”

Alia Bhatt also paid her condolences after Dilip Kumar’s demise. She tweeted, “He will always be the gold standard for actors to imbibe from… the cultural world just lost its shine but the legacy of his light lives on forever. Rest in peace Dilip Saab.”

He will always be the gold standard for actors to imbibe from… the cultural world just lost its shine but the legacy of his light lives on forever.

Kareena Kapoor Khan shared a photo of Dilip Kumar with her late grandfather Raj Kapoor on her Instagram story. “RIP,” she captioned the post with a heart emoji.

Bollywood legend Jeetendra also extended condolences to the late actor. He said, “What can I say about this legend, Dilip Kumar Sahab, who showed us the way. Who showed us how it’s done, with so much grace and elan. He has been an inspiration to people like me who have aspired to be like him in every possible way. His love and warmth is unmatched and there will never be another like him. He was not just a genius on screen but also a great friend and a gem of a person. His contribution to cinema and our lives is huge. I will miss him dearly. May he rest in peace. Condolences to the entire family and Sairaji.”

Janhvi Kapoor wrote, “Thank you for everything you have imparted to us through your iconic work, your wisdom and your words.” She added, “#RIP Dilip Saab- you are truly irreplaceable. And thank you.”

Paying his respects, Shahid Kapoor wrote, “We are all nothing but versions of you Dilip Saab. Every actor has studied you in awe. Wondering how you did it all. You were as close to PERFECT as it can get.”

“All the great legends are templates for human behavior. I would define a myth as a story that has survived. #dilipkumar #yusufkhan “Inna Lillaahi Wa Inna ilayhi” “Om shanti” #restinpeace,” wrote Sonam Kapoor.

Speaking to ANI, Raj Babbar remembered Dilip Kumar and said, “Not only in India, not only in the Indian film industry but through his acting all over the world, the best actor left the world today. We are proud that Dilip Kumar has been the head of our film industry. He has played excellent roles, has given a new school to acting. There are many actors like us who studied in that school. Whether he has been in Hindi films, whether he has been in Tamil, Telugu, Malayalam, he has influenced all the actors.”