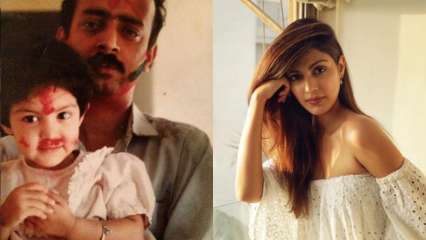 Actress Rhea Chakraborty shared an emotional note to wish her dad, Indrajit Chakraborty on the occasion of Father’s Day. Rhea shared a throwback photo featuring her father and her with Holi colours on their faces and called herself ‘fauji ki beti’. She also apologised for the tough times their family had to face in the recent times.

While sharing the photo, Rhea wrote, “Happy Father’s Day to my papa ! You are my resilience, you are my inspiration. I’m sorry times have been tough , but I’m so proud to be your little girl My daddy strongest ! Love you papa Mishti #faujikibeti.”

Reacting to the post, Shibani Dandekar commented, “awwwwwwww best. Another user wrote, “He will be proud of you too. You are someone who has proven to be very strong and who has held her head high and faced the storms bravely.”

Rhea Chakraborty was dating actor Sushant Singh Rajput before his death. Following his demise, Rhea and her family were subjected to intense media scrutiny. Sushant’s family blamed Rhea’s family for using his money. A subsequent case regarding the drugs angle was later filed. Rhea’s father was also called for questioning by the CBI.

Rhea has not been very active on social media since SSR’s death. However, earlier this week, she penned a long and heartbreaking note remembering her ‘puput’ on his first death anniversary.

On the work front, Rhea is all set to make her comeback with Amitabh Bachchan starrer ‘Chehre’, which also features Emraan Hashmi, Annu Kapoor, Krystle D’Souza in pivotal roles.