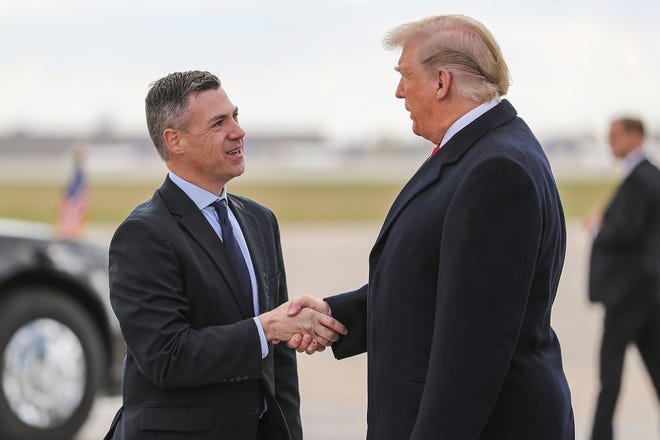 WASHINGTON — The fight to replace Rep. Liz Cheney, R-Wyo., continued on Sunday with the head of the largest GOP caucus calling for the GOP conference chair’s ouster on “Fox News Sunday.”

Who is Liz Cheney?:House Republicans’ No. 3, daughter of a VP, Trump critic

More:Rep. Liz Cheney could lose GOP leadership role over her criticism of Trump. What does that mean?

“Any leader who is not focused on pushing back against the radical and dangerous Biden agenda needs to be replaced,” Rep. Jim Banks, R-Ind., told the program when asked about his reasoning for opposing her leadership. Banks is chairman of the Republican Study Committee, the largest GOP caucus in Congress.

Since taking control of the caucus in 2021, Banks has sought to build a larger messaging platform and court influence with fellow Republicans. The Indiana Republican has also made no secret that he is interested in replacing Cheney as conference chair.

“The most natural comparison to RSC chair is conference chair,” Banks said during an interview with Politico. “And that’s something I think I would really enjoy because it’s what I’m doing now.”

The current push to remove Cheney from leadership underscores the dominance of Trump and allied factions within a Republican Party transformed over the last four years. Expressing loyalty to the former president, including support for debunked conspiracy theories about the 2020 presidential election, are now important litmus tests for the party.

Banks told “Fox News Sunday” that he agrees President Joe Biden was legitimately elected but repeated he had “very serious concerns with how the election was conducted,” citing the COVID-19 pandemic.

Banks declined to say whether Trump bore any responsibility for the Jan.6 insurrection and stood by his vote to contest the certification of the election results.

Since the deadly riot at the U.S. Capitol, Cheney has been a vocal Trump critic Trump, urging her fellow Republicans to disavow the president and the many unfounded conspiracy theories he levied about the 2020 presidential election.

Cheney, the third-ranking member of Republican House leadership and one of only 10 House Republicans to vote for the president’s second impeachment after the Capitol insurrection, survived a February secret ballot vote to remove her from leadership.

Jan. 6 charges:Capitol riot spurred conspiracy charge against 31 suspects, but how hard is it to prove?

Yet the Wyoming Republican’s continued condemnation of the party’s embrace of Trump has renewed ire against her.

“I’ve had it with … I’ve had it with her. You know, I’ve lost confidence,” House Minority Leader Kevin McCarthy said on a hot mic before a May 4 segment on Fox News, apparently not realizing he was being recorded, per tape obtained by Axios. When asked by Fox News’ Steve Doocey whether another vote to remove Cheney would take place, the minority leader replied, “Well, someone just has to bring a motion, but I assume that will probably take place.”

Other national Republicans have taken a different view of the situation on Sunday. Utah Republican Gov. Spencer Cox cautioned on CNN’s “State of the Union” that the leadership fight showed hard divisions in the GOP and that “as we talk about broadening the tent and bringing in a new generation of Republicans we really have to allow for those types of differences.”

Town attorney’s final word:Trump can live at Mar-a-Lago as a ‘bona fide employee’

Maryland Republican Gov. Larry Hogan condemned the centrality of Trump to the party, telling NBC News’ “Meet the Press”: “It just bothers me that you have to swear fealty to ‘Dear Leader’ or you get kicked out of the party,” calling the fight to replace Cheney “sort of a circular firing squad where we’re just attacking our own party.”

Rep. Adam Kinzinger, R-Ill., one of the few House Republicans to vote for Trump’s second impeachment, also expressed support for Cheney on Sunday.

“It’s incredible. Liz Cheney is saying exactly what Kevin McCarthy said the day of the insurrection. She’s just been consistently saying it. And a few weeks later, Kevin McCarthy changed to attacking other people,” Kinzinger said on CBS News’ “Face the Nation.”

Cheney has shot back at the effort to remove her from leadership, calling the current moment in the GOP a “turning point” that threatens to undermine the party and country.

Calling for border relief:Rep. Henry Cuellar, one of Biden’s harshest critics on the migrant surge, is urging White House to listen to border towns