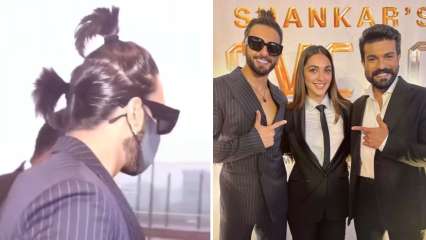 Actor Ranveer Singh, known for his quirky and eclectic fashion sense, attended the grand launch of the Kiara Advani and Ram Charan-starrer ‘RC15’ on Wednesday (September 8). Ranveer’s look from the event is trending massively on social media, especially his unique hairdo.

In the viral pictures from the event, Ranveer can be seen looking uber-cool in a pinstriped grey blazer, pants and shirtless combo. What drove netizens crazy was Ranveer’s double ponytail hairdo — one at the top and another at the back.

Earlier Ranveer was papped at the Mumbai airport while leaving for Mumbai. After the pictures and videos of ‘Padmaavat’ star surfaced online, fans and followers poured in their reactions to his eye-catching hairstyle. Have a look at the video:

Reacting to the Ranveer’s attire and hairdo, one user wrote, “Why is he having 2 fountains on his head,” wrote a user while another commented, “Bohot mood kharab tha ise dekh kar hasi aagayi.” A third user wrote, “He looks good for once except for the ponies and the cleavage makes me remember those 70’s pimps,” while a fourth one commented, “outfit is super hot but whyyyyy that hair.”

On the other hand, fans also appreciated Ranveer’s style. “I love this man he does whatever he wants,” wrote a user while another commented, “Woow kya style hai.” A third user wrote, “MAAR HI DAALOGE KYA,” wile a fourth one commented, “Hotness.”

Ranveer Singh is popular for confidently experimenting with fashion, and pulling off outfits that are usually against the stereotypical gender norms. Meanwhile, on the work front, Ranveer is working on Karan Johar’s directorial venture ‘Rocky Aur Rani Ki Prem Kahani’ with co-star Alia Bhatt.

He also has ’83’, ‘Jayeshbhai Jordaar’, ‘Cirkus’ and ‘Sooryavanshi’ in the pipeline.