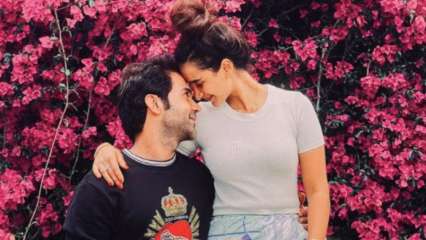 Actor Rajkummar Rao is celebrating his 37th birthday today (August 31). While wishes poured for the acclaimed actor from the film industry, it was his girlfriend and actor Patralekhaa’s wish that was the most special to him and also left the internet swooning.

On the special occasion, Patralekhaa took to Instagram to pen a heartfelt post for the ‘The White Tiger’ actor. She shared an adorable photo with Rajkummar where the two are going into each there’s eyes with love while Patralekhaa is sitting on his lap. The background full of pink Bougainvillea flowers only made the picture more romantic.

“Happy Birthday @rajkummar_rao. You know what you mean to me. I always wish that you outdo yourself in every character that you play because I know that’s what you wish for yourself. Thank you for being rock solid through this difficult period. I love you. Baki baatein Instagram par nahi ghar par,” she captioned her post.

Soon after she posted the photo, Rajkummar reacted to his ladylove’s note and wrote, “I love you,” with heart emojis. Celebs such as Huma Qureshi, Aparshakti Khurana, Aditi Rao Hydari, Diana Penty and Tillotama Shome dropped heart emojis in the comments section.

Fans also reacted to the photo and showered love and blessings on the couple. “Areh such a sweet picture,” wrote one user while another commented, “Awwwwww.” A third user wrote, “awwwwww so cute,” while a fourth one commented, “Favourites.”

Many other celebrities from the Indian film industry such as Ayushmann Khurrana, Sonam Kapoor, Kriti Sanon and Anushka Sharma among others wished Rajkummar on his birthday. Patralekhaa and Rajkummar have been in a relationship since 2010.

On the work front, Rajkummar was last seen in the ‘Roohi’ opposite Janhvi Kapoor. He will next be seen with Bhumi Pednekar in ‘Badhaai Do’ and also the Hindi remake of the 2020 Telugu thriller ‘HIT: The First Case’. Meanwhile, Patralekhaa was last seen in the web show ‘Mai Hero Boll Raha Hu’.

Rajkummar Rao on resuming work on his next amid pandemic