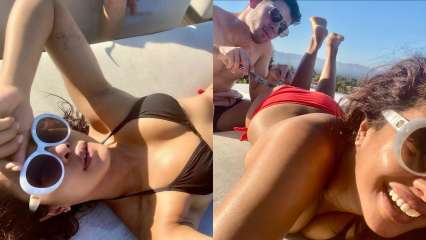 Looks like Priyanka Chopra has finally reunited with her husband, singer Nick Jonas after spending weeks in London shooting for her upcoming web series ‘Citadel’. Priyanka took to her Instagram on Monday and shared a couple of steamy photos featuring Nick and well, fans do love to see Nickyanka together.

The first one is an adorable yet cheeky photo where Priyanka can be seen lying stomach-down on a chair as Nick uses a fork and knife on her hips. The couple looked chic and classy with their shades as they chilled together on a sunny day. Priyanka also penned a witty caption for the photo. “Snack,” she wrote.

Reacting to the photo, Priyanka’s cousin and actor Parineeti Chopra commented, “Jeej! Mimi didi! What is going on here the family is on instagram ***Tries to hit like button with eyes closed.”

Fans also reacted to the photo with hilarious comments and replies. “Can I have some snacks too??” wrote one user while another commented, “Wow darling.” A third user wrote, “this is hilarious,” while a fourth person commented, “aag laga di.”

In the second selfie, the actress looked hot and sexy in a black and red bikini set. Priyanka looked stunning as she flaunted her toned figure while basked in the sun. “Sundays like this tho,” she captioned her post.

Fans also showered love and compliments on the photo. “That body,” wrote one user while another commented, “hotness alert.” Another user wrote, “Too Hot To Handle.”

Meanwhile, on the work front, Priyanka has been shooting in London for her upcoming show ‘Citdel’, which is a spy-thriller directed by The Russo Brothers. It stars Priyanka and ‘Game of Thrones’ fame actor Richard Madden in lead roles.

She recently launched an Indian restaurant called Sona in New York and also released her memoir titled ‘Unfinished’ earlier this year. Priyanka will next be seen in ‘Text For You’ which also features Celine Dion and Sam Heughan in the lead roles. Apart from that, she will also be seen in ‘Matrix 4’ and the recently announced Bollywood film ‘Jee Le Zaraa’, which will mark actor-filmmaker Farhan Akhtar’s return as a director.