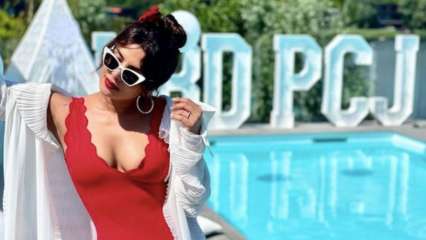 Priyanka Chopra and Nick Jonas are madly in love with each other. The couple spend very little time with each other due to professional commitments and their hectic lifestyle but when they shower love and compliments on each other’s social media post in a way of expressing their feelings.

On Sunday, Priyanka uploaded a sizzling hot selfie of herself. In the photo, Priyanka can be seen in a white top and crimped hair as she sensuously poses for the camera. She captioned the photo with a heart emoji and wrote, “#selfiemode #citadel.”

Reacting to his wife’s photo, Nick Jonas wrote, “You’re hot,” in the comment section. He also added a lovestruck emoji. Fans also took to the comments to praise Priyanka. “My beautiful queen,” wrote one user while another commented, “I love this!! I love you Priyanka.” A third user commented, “Yessss the selfies are back,” while the fourth one wrote, “Most beautiful pic.”

For the unversed, Priyanka Chopra is currently in London shooting for her upcoming web series ‘Citadel’ with also stars Richard Madden and Stanley Tucci. She also has the next installment of the Matrix franchise and an American film, ‘Text For You’ in the pipeline.

In Bollywood, she was most recently seen in Rajkummar Rao and Adarsh Gourav’s film ‘The White Tiger’ and also with Farhan Akhtar and Zaira Wasim in Shonali Bose’s ‘The Sky is Pink.’

This year, Priyanka recently celebrated her birthday, away from Nick her family and friends. She shared a series of photos on her Instagram and thanked everyone for their wonderful wishes. She wrote, “Thank you to everyone who sent me so much love and affection this birthday. So many wonderful texts calls stories tweets. This was a quiet birthday but the lesson I have learnt as I step into the next year is everyday is a joy. And I will always seek it. Thank you to for all your good wishes and constant support. Thank you @nickjonas for making this bday so special even tho you weren’t here. Thx @cavanaughjames @divya_jyoti @tialouwho for being my bday weekend buddies!”

Priyanka often shares photos of her friends Divya Jyoti and James Cavanaugh as they both accompany her on her trips.