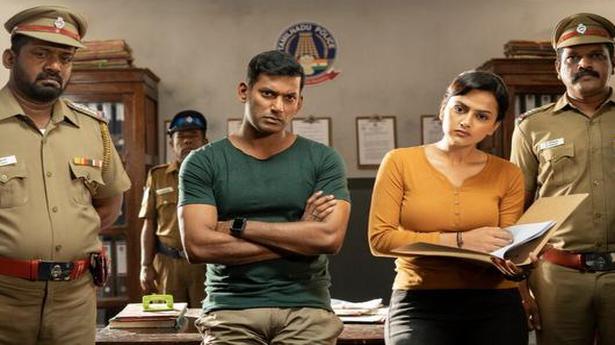 The Madras High Court on Tuesday ordered notices returnable by Thursday to actor Vishal Krishna and director M. Anandan on a plea by production firm Trident Arts to restrain the release of the actor’s upcoming movie Chakra on Over the Top (OTT) platform.

Justice N. Sathish Kumar decided to hear the actor as well as the director before passing interim orders on the applications moved by the production firm accusing the actor of owing it over ₹ 8 crore due to poor box-office performance of his movie Action.

The applicant’s counsel Vijayan Subramanian told the judge that Trident Arts had so far distributed over 500 movies but ventured into production only in 2016. Since then, it had produced four movies and the last of it was Action directed by Sundar C.

Claiming that it was the actor who persuaded the firm to produce the movie at a cost of ₹ 44 crore, the firm claimed that he also agreed to bear the shortage if the movie does not collect a minimum of ₹ 20 crore through theatrical collections in Tamil Nadu, Andhra Pradesh and Telangana alone.

Contrary to expectations, the movie collected only ₹ 7.7 crore in Tamil Nadu and ₹ 4 crore in Andhra Pradesh and Telangana. Since there was a shortage of ₹ 8.29 crore in the expected collections, the actor was supposed to offset it, the firm claimed.

Backing its claim on the basis of a written agreement to that effect, Tirdent Arts said the actor later agreed to act one in more movie, to be directed by Mr. Anandan, under its banner in order to settle the money and finalised the script for the proposed movie.

The fifth venture of the production firm was to be directed by Mr. Anandan who entered into a director engagement agreement. Subsequently, there was a lockdown to fight COVID-19 and hence the applicant firm could not go ahead with the production.

In the meantime, it was shocked to come across reports of the actor and director duo having made a movie titled Chakra and planning to release it on OTT platform.

Trident Arts claimed that the script of the movie Chakra was the same which it had intended to produce as its fifth venture. However, the actor and Mr. Anandan had now got the movie produced through someone else, it alleged.

Also claiming that Chakra was proposed to be sold for ₹ 44 crore for its release on OTT platform, the production firm urged the court to stay the release until the disputes could be resolved through arbitration after the actor furnishes sufficient sureties for ₹ 8.29 crore.