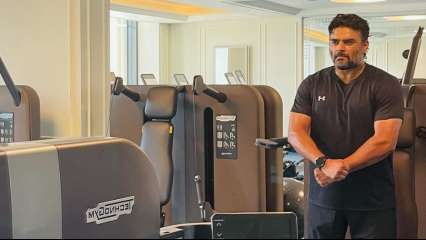 R Madhavan, the star of the film ‘3 Idiots’, is quite active on social media and never misses an opportunity to amaze his fans, whether it’s through his performance or through his social media posts.

We’ve been treated to some slick gym shots from the actor. Taking to Instagram he posted three photos and wrote, “Dad bod be dammed.. Maddy boy is inching back…”

Take a look at some other posts by the actor-

Ranganathan Madhavan (born June 1, 1970) is an Indian actor, screenwriter, director, and producer who works primarily in Tamil and Hindi films. Madhavan has won three Tamil Nadu State Film Awards and four Filmfare Awards South. He has been considered as one of India’s few actors who can appeal to a pan-Indian audience, having acted in films in seven different languages.

Madhavan rose to prominence in Tamil cinema because of Mani Ratnam’s hit romantic flick ‘Alaipayuthey’ (2000). He quickly established himself as a romantic hero, starring in Gautham Menon’s directorial debut ‘Minnale’ and Madras Talkies’ ‘Dumm Dumm Dumm’, two of the highest-grossing Tamil films of 2001.

Madhavan took a break from acting after participating in two more box office smashes, ‘Tanu Weds Manu’ (2011) and ‘Vettai’ (2012). After returning to the industry in 2015 after a three-year hiatus, his comeback flicks, ‘Tanu Weds Manu Returns’ (2015), ‘Irudhi Suttru’ (2016), and ‘Vikram Vedha’ (2017), all received critical and commercial accolades. He won Best Actor prizes at the Filmfare, IIFA, and SIIMA award ceremonies for his portrayal of a haughty boxing coach in ‘Irudhi Suttru’.