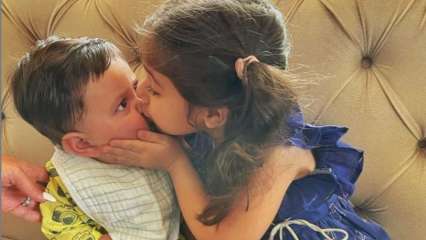 In the photo, Inaaya who is seen dressed in a pretty blue frock and hair styled in pigtails is seen kissing little brother Jeh on the nose while the latter looks into Inaaya’s eyes. Jeh is seen looking cute as a button sitting on the couch with mom Kareena supporting him with her hand from behind. He is seen dressed in a bright yellow coord set with camera prints all over and a bib around his neck.

Take a look at the unmissable photo here:

As for Kareena, she wasn’t in any of the photos shared by Soha so far. Fans only got a glimpse of her hand when she was lending support to Jeh who was seated on a couch.

For the unversed, Kareena, Saif, Taimur and Jeh returned to Mumbai on Sunday after having spent quality time in the Maldives where the family had jetted off to, to spend Saif’s 51st birthday.

Days ago, on the six-month birthday of Jeh, Kareena had shared his picture cradled in her arms in the Maldives, the serene blue sea overlooking them. In her caption, Kareena wrote: “Love, happiness, and courage to you always. Happy 6 months my life.”

On the work front, while Kareena will be seen in ‘Laal Singh Chaddha’ opposite Aamir Khan, Saif is gearing up for the release of ‘Bhoot Police’ alongside Arjun Kapoor, Yami Gautam and Jacqueline Fernandez.