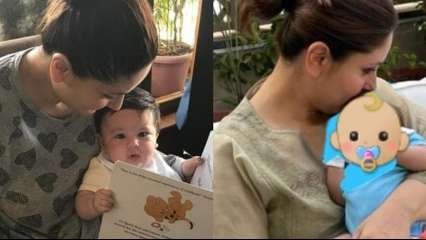 Taimur and Jeh, Kareena Kapoor Khan’s two sons, are her pride and joy. Because she comes from a family of actors, people think it is only natural that her children will follow in her footsteps. The actress, on the other hand, has a different viewpoint. She declares that she does not want her children to become movie stars.

In an interview with HT Brunch, the actress opens up about her son’s career path and a lot more.

She said, “I want both my sons to be thorough gentlemen, I want people to say they are well-brought-up, kind-hearted and I will think my job is well done,”. “I don’t want them to be movie stars. I’ll be happy if Tim comes and tells me I want to do something else… climb Mount Everest may be… that’s his choice. I want to stand by and support my boys.”

Kareena is adamant that she does not want to be a helicopter mom. She said, “I don’t want to be like a helicopter mom. I want them to fall and learn because that’s the way my mother taught me. My mother was like, do what you want, make your mistakes and then learn to repair them because that’s the way it works. So that’s the way I am parenting both the boys. Jeh, of course, is small, but Tim is now much more aware. I am like if he does something wrong, you clear up your mess. That’s the only way they learn.”

When asked if she and Saif are doing things to keep Jeh away from Paparazzo, she said,  “Yes, we are already”. “It was so overwhelming with Taimur… there was so much chatter: what’s going on, what have they named him, then… Taimur has gone here, Tim is doing that. It was so much that both Saif and I felt that this time, we must chill out. They’re just kids at the end of the day. So we haven’t released any pictures of Jeh yet, even though Tim happily waves for the camera.”

In the film ‘Laal Singh Chaddha’, Kareena will star alongside Aamir Khan. The movie will be released on Christmas. In contrast, Saif will appear in the films ‘Bhoot Police,’ ‘Adipurush,’ and ‘Vikram Vedha.’