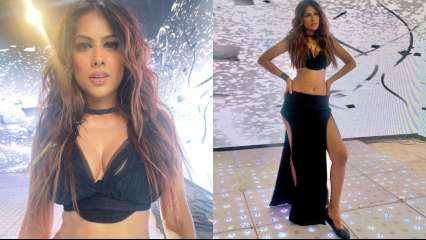 Nia Sharma of ‘Jamai Raja’ fame has been raising a sensation recently with her images and videos. On the one hand, the actor’s boldness is lauded, but she is also the target of some unwarranted online trolling. Her photographs have recently been the talk of the town. Nia never fails to impress fashion experts and leave her followers gasping for air, whether it’s in sultry shots in a sultry Barbie tube top paired with white denim or monochrome photos in a black crop top paired with a little skirt.

Recently Nia uploaded photos of herself in an outfit that featured a plunging neckline and accentuated her legs.

Take a look at her photos-

Check out Nia’s other posts too-

Nia’s career took off after she was cast in the lead character of Manvi Chaudhary in Star Plus’s ‘Ek Hazaaron Mein Meri Behna Hai.’ In Zee TV’s ‘Jamai Raja,’ she plays Roshni Patel. She established herself as a major and popular actor with roles such as Aarohi Kashyap in Colors TV’s thriller ‘Ishq Mein Marjawan’ and Naagin Brinda in Colors TV’s supernatural vengeance series ‘Naagin: Bhagya Ka Zehreela Khel’. She also appeared in the reality stunt show ‘Khatron Ke Khiladi 8’ in 2017 and made her digital debut in the same year with Vikram Bhatt’s online series ‘Twisted’. In March 2021, she made her most recent appearance in the second season of her web series ‘Jamai 2.0’, which launched on ZEE5.